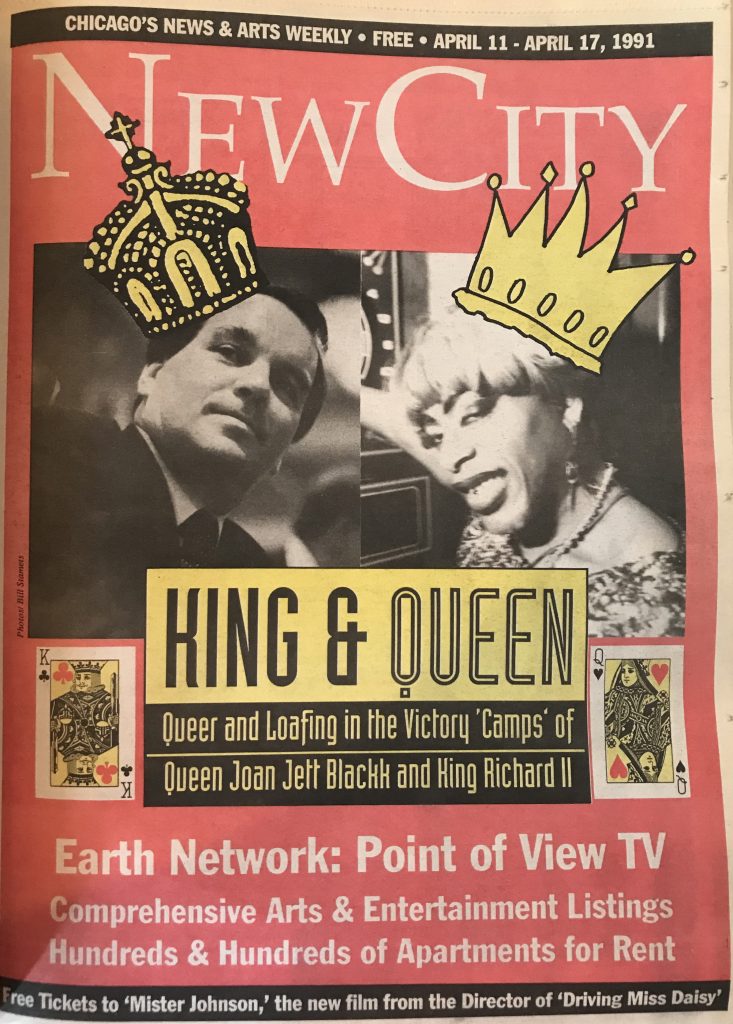 Richard the Younger’s coro­nation at the Chicago Hilton just sounded like too much fun. The Dick Judson Or­chestra playing an experi­mental version of “Dancing in the Streets” and the Samuel Delreal Band dishing out your fa­vorite rhumba hits. Performance art provided by underage Bridgeporters drinking beer out of wine glasses.

Very tempting. However, I de­cided to heed the advice of my good friend Don Henley. He once told me that life in the fast lane surely makes you lose your mind. I had just re­turned from vacation and decided on a more sedate night of election coverage.

As I set out on my journey, my knowledge of Joan Jett Blakk and her quixotic mayoral campaign was sketchy at best. I knew that she was sponsored by Queer Nation, a gay rights and awareness group, who hoped Blakk’s campaign would bring attention to their “We’re here, we’re queer, get used to it” philosophy.

I knew that her major campaign appearance had been a shopping spree on the Mag Mile where she was reportedly well received, par­ticularly by the patrons of Henri Bendel who thought her outfit was to die for.

I had also been intrigued by a flyer that proclaimed Blakk was running on the slogan that “Chicago Needs A Queen” with a well-detailed platform of”Gays and Dykes against Tax Hikes” and “Bijou Naughty, Bijou Nice, Fire The Cops Of Vice.” With the recent death of Lee Atwater, a vacuum exists in the arena of slick and clever campaigning. Could Joan Jett Blakk be the Glenda the Good Witch of politics riding in to lead us political junkies down the yellow brick road now that the Wicked Witch of the West was dead? I was hellbent to find out.

My companion, Adrienne, and I arrived to campaign central close to 9pm. Located in a nondescript building, Suzy B’s, like many gay bars in “straight” neighborhoods, isn’t even identified by an outside sign. Once inside, it became clear that the bar was one of those water­ing holes with a loyal clientele that needs no beckoning neon marker. The almost eerie coziness of the environs practically started me humming the “Cheers” theme song.

After a minute, I approached a lean woman in a black t-shirt with biceps as big as my girlie-man thighs, hoping she could lead me to the candidate.

“Hi! I’m from Newcity, here for the Joan Jett Blakk victory party. Is her campaign manager around?”

“l don’t know what the fuck you’re talking about. Wanna throw some darts?”

All thoughts of Sam, Norm and the place where everybody knows your name quickly disappeared.

The electoral tidal wave of Joan Jett Blakk had not yet completely swept the bar. We grabbed a beer and admired the Elvis pictures hanging in the bar as Daley made his victory speech. It was the consensus of the growing crowd that Dick sounded downright articulate with the mute button on.

My new muscular friend gra­ciously surrendered the dart board to my partner and me. We were promptly hustled by another body­builder type named Sue and her mild-mannered, yet dead-eyed sidekick Don.

After having our asses whipped, not literally, by a score of 424 to 36, there was still no sign of the enig­matic Blakk. I was beginning to become despondent at the prospect that he/she might be just another mythical creature, like the recently missed Easter Bunny, spoken about in reverent tones by children, but never seen by the human eye.

Just as I was beginning to lose hope, a group of handsome young men entered the door with knap­sacks and video equipment in tow. Dressed in stylish baseball caps and loose-fitting garments, the posse looked like they might be The Pet Shop Boys’ stunt doubles arriving early for their Chicago appearance.

However, as they began to slide out of their pantaloons and blouses in front of God and country, it became obvious that something important was about to happen.

I watched one young lad who had entered wearing a black jacket with the patch “Shy Queer” transform himself into a shapely young thing. Resplendent in black hose and pumps, faux pearls, a mustard-col­ored sweater dress and a feathered pillbox hat, Nathan Mason was a sight to behold.

I walked up to Nathan, comp­limented him on his ensemble and began to question him on the myste­rious Ms. Blakk and her campaign.

Beyond Tuesday night’s tom­foolery, Nathan told me that there was a message behind Blakk’s campaign.

“Obviously we don’t take this too seriously,” Mason said. “We [Queer Nation] decided that since it was such a joke with Daley getting re­-elected that we might as well use the election to increase gay and lesbian awareness in Chicago. Events like the shopping spree have been de­signed to let people know that we are still here and aren’t going away.”

“We were sitting around at a Queer Nation meeting a few weeks ago talking about the farce of this election and decided that we should run a candidate and camp up the campaign. It wasn’t a direct reaction to Daley’s positions—although I think while he has supported gay rights, he hasn’t been pro-active on gay issues—but more in the spirit of Queer Nation’s goal of greater awareness and equality for all gays.”

Elliot promised me that the candidate would be arriving shortly. I decided to stick around, and approached a man with hairy legs and a shiny red poly knit dress setting up a camera.

Gabriel Gomez turned out to be the director of a documentary crew recording Blakk’s exploits for posterity and distribution to other Queer Nation chapters. He seemed to be taking the whole affair a little more seriously than his cross-dressing comrades. His dark eyes appeared to be slightly possessed as he offered his view on the political significance of Joan Jett Blakk.

“I see this whole running for office thing as playing a role in us becoming queerer every day, Gomez said. “Hopefully this video will help spread the word to other groups and get them started running candidates. I won’t be satisfied until I can kiss my bush in the street.”

Not sure of the meaning of this last remark, I nodded politely and slowly slid away, allowing Gomez to direct his rapturous energy toward his bulky video equipment.

As I pondered that last remark, Suzy B’s erupted in cheers. Had Blakk made her grand entrance? Alas, another false alarm. The cheers were for Helen Shiller who successfully fought off Daleyite Mike Quigley’s ham-handed challenge. Hugs and kisses were passed around liberally. It is the general consensus that Shiller would be allowed to keep her seat on the City Council even after Blakk’s inevitable rise to the fifth floor. All the rest of the aldermen, according to her royal Blakkness, are to be replaced by leather dykes.

Finally, when I had just about given up all hope, Elliot, the CAMPaign manager, strolled to a makeshift stage and spoke into the mike.

“I know all of you have been waiting a long time, so without further ado, I’d like to introduce the mayor of Chicago; the city of padded shoulders. She’s pro-active, pro-sex, pro-choice and prophylactic. Your Honor, His Honor, Her Honor, Joan Jett Blakk.”

Suzy B’s broke into pandemonium as a copper-skinned beauty, with legs and biceps that both Ike and Tina would have died for, mounted the stage.

Wearing a sequined top and a scandalously short, white mini-skirt topped by a Berry Gordy-era Diana Ross coif. Blakk’s outfit was complemented by a wise choice of accessories, including a subtle string of pearls and red ersatz silk gloves. This girl knew what she was doing.

“Well, regardless, I’m demanding a recount,” Blakk cooed. “Fuck Dick Daley, with my dick, daily. Oh, this skirt is so short. I’d like to thank everyone who participated in this campaign. Hopefully, Queer Nation’s name is out there and people are saying who the fuck is that.

“I hope this is the start of something with Queer Nation candidates running in every election, not all in drag of course. We could have them running for president, governor and for the Supremes, I mean Supreme Court. Thank you all so much for your support.”

Someone asks what Blakk is going to do for Chicago once the recount declares her the winner.

“Once elected, the first thing I’m going to do is change the police to the fashion police. Who knows after that, dye the river pink on Fridays. I’ll have to take it as it comes,” Blakk said saucily, leaving no doubt about the not-so-subtle double entendre.

I managed to worm myself through the maddening crush of people hoping just to touch the messianic Blakk. She agreed to speak to me for a minute before going back on stage to perform with her good friend, Girly Hussy.

As I talked to her, it became evident to me that the years have been kind to the thirty-four-year-old Blakk. She didn’t look a day over twenty-five.

In her prior incarnation, Joan had been known as Terence Smith and counts being a runner-up in the 1983 Mr. Windy City contest as one of his/her’s proudest accomplishments.

Blakk related that the campaign had been mostly a fun, if grueling, experience dedicated to humor and enhanced awareness.

“We just wanted to increase gay visibility and fight a rising homophobia here in Chicago, but do it in a not-so-tense way that everyone could have fun with,” Blakk said. “Everyone knew Daley was going to win, so we just wanted to have some fun.”

Of course, I had to ask her about the origination of her wonderful name.

“We were sitting around Queer Nation and I knew that I wanted something to go with Blakk. We threw things around until someone said Joan Jett Blakk. I liked the jet black thing. Besides, she owed everybody something for all those bad records.”

It was time for Blakk to return to the stage and she excused herself, but not before she let me know of her upcoming April 20 appearance at Lower Links, where she will be performing in “Lady Drinks the Booze.” Mark your calendar.

Blakk returned to the stage with Girly Hussy. Girly cut a striking pose with an angular face badly in need of a good shave. The duo broke into an aesthetically pleasing lip synch of “Love Shack” that brought the house down. Fred Schneider would have been proud.

As I exited a little after midnight, I gave Blakk a kiss on her silk gloves to thank her for the hospitality.

It seemed the right thing to do.