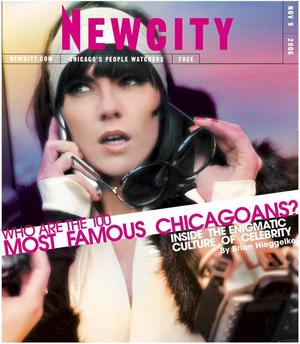 I found myself among the reporters on the red carpet at Macy’s Glamorama party this fall, watching as a march of B- and C-listers chatted up the fashion and lifestyle press who’d lined up to collect quippage for transmission to their audiences, while waiting for the night’s sole A-lister, the mega-wattage Beyonce Knowles, to make her last-minute arrival. At some point, I overheard someone exclaim in surprise, “Billy Dec is on the red carpet.”

By crossing the ropes to the other side of the red carpet, the nightclub impresario, “Bachelorette” employer and frequently photographed pal of David Schwimmer crossed the line, so to speak. I had the same reaction until I realized that, unlike many of those being paraded before us, I’d actually heard of him. The problem with Dec, it seems, is that he is one of ours—a Chicago celebrity.

We’re living in a paradoxical time. Thanks to the advent of digital technology, the hegemony of mass media is weaker than it’s been in generations. The headlines in the daily newspaper often report on its very own impending doom. So go the broadcast networks. Yet, at the same time, the culture of celebrity has never been more pervasive. We watch celebrity news, we’re transfixed more by the red-carpet arrivals and the “fashion police” analysis than the awards shows themselves, we all know who Paris Hilton is, she the very creation of celebrity culture, the manifestation of “famous for being famous.” Celebrity is a creation of the press, which manufactures fame as part of its efforts to sell papers or boost ratings, while simultaneously decrying the culture of celebrity. But the press as we know it seems to be dying—just as its creations become bigger than ever.

Chicago is more consumer of celebrity culture than its creator. But we’ve always had our share of both local celebrities and global phenoms. We even have a few movie stars among us, though those who stay here usually do so specifically to stay out of the spotlight at home. (Vince Vaughn, anyone?) Wasn’t long ago that, save for a sports hero or talk-show host, TV newscasters were the closest we got to local celebrities. Nowadays, the TV networks are hard-pressed to find viewers who don’t live in a nursing home, and their newsreaders seem so—what, unimportant? Which led us to wonder, who are the most famous Chicagoans? The rise of Google, and the related practice of “googling” people, offered a way to measure fame on a relative basis, at least as reflected on the web. Our “Chicago Fame 100” resides below, where you’ll likely note a few “of courses” as well as plenty of “who?” like we did. And maybe a few “how did they forgets,” which I’m sure you’ll tell us about.
Fame is relative, more so now than ever. Every special interest, every industry, has its own list of “players.” If you’re part of the group, you know them all. If you’re not, it’s a list of foreign names. As the media loses mass but subcultures gain traction through digital communities, your American idol is likely to be my American who?
Once you get past the top 25, the Chicago Fame 100 gets fairly interesting. I especially enjoy some of the juxtapositions and wonder if they know each other. For example, Bears linebacker Brian Urlacher resides at #43, just ahead of Studs Terkel and Steve Albini. Somehow, I don’t see the three of them going fishing together. Another pleasant surprise is the presence of poets and Nobel Prize winners on the list. The mainstream media may ignore the intelligentsia, but clearly the public does not. Equally surprising is the poor showing of local newscasters who used to seem like our biggest celebrities. Most of those we checked did not even make the cut. Nor, for that matter, did Billy Dec.
But Oprah sure did. As far as we can tell, Oprah Winfrey has become one of the world’s most famous people—bigger than Tom Cruise, Brad Pitt or Madonna. Only George W. Bush, with 88.9 million results, is better known among the names we searched. We even checked out dead Chicagoans: Al Capone (2.4 million), Gene Siskel (815,000), Walter Payton (589,000), John Wayne Gacy (361,000) and Richard J. Daley (197,000).

In 1966, John Lennon quipped to a London newspaper that his Beatles were “more popular than Jesus now” and all hell broke loose. Nowadays, it doesn’t seem that surprising that Oprah is nearly twice as popular as Jesus Christ, at least that’s the result if you use our method of weighing celebrity. Given her charitable nature and self-effacing persona, we can live with that. But the fact that Paris Hilton is also bigger than Jesus? You decide that one.

Notes on methodology: The definition of “Chicagoan” is quite fluid and, in the end, we were subjective in our decisions. This is especially challenging for music and movie artists, who often live in New York or LA for work reasons. Ultimately, we evaluated them based on how much they continue to be associated with Chicago, or whether the core of their career was spent here. Just being from here was not enough. We googled every name as spelled on the chart, in quotes, and did so in the seven days between November 1 and November 8. In some cases where names are “common” and indistinguishable from others who share the name, we added a second search criteria (e.g. “+ Chicago”). Not a perfect science for sure, but better than any other we can imagine. Clearly the web favors text, especially in searches. This means broadcast fame is underrepresented, unless there is related “chatter” on the web. It also undercounts “society” photos, since those are often not uploaded online. In fact, writers are especially at an advantage, since they also benefit from links to stories they’ve written. Score one for the good guys!