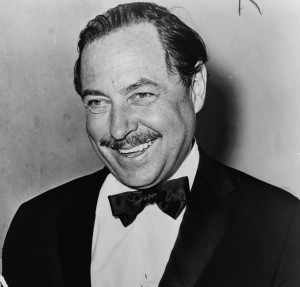 Formerly part of the Medinah Athletic Club, the swimming pool at 505 North Michigan is a 1920s Hollywood/Arabian fantasy, complete with gilded fountains and thousands of hand-laid mosaic tiles surrounding a Junior Olympic-sized natatorium. Now belonging to the Hotel Inter-Continental, it has attracted more than its share of celebrities and artists. Built in 1929, the screen’s first Tarzan, Johnny Weissmuller showed off his jungle dives there. During the 1940s, screen and swimming siren Esther Williams also graced its waters. But the most notable of these may have been Tennessee Williams. Like “The Night of the Iguana”’s Rev. Lawrence T. Shannon returning to the Pacific Ocean, Williams regularly sought refuge from a hostile, critical world in the pool’s aqua blue waters.

He began visiting Chicago regularly in the late 1970s. The Goodman Theatre’s production of his final play, “A House Not Meant to Stand,” brought him to Chicago full-time in 1982. That was the same year I graduated from lifeguard school, and the lamination was still drying on my Red Cross card when I got a job guarding the pool at what was then The Radisson Hotel.

Perhaps not the first, but maybe the second or third day on the job Tennessee Williams walked into “my pool.”
Williams wasn’t the dashing, fedora-wearing, Pulitzer Prize-winning playwright sunning with Truman Capote on the Mediterranean. Forty years of heavy drinking and drug use had ravaged his body and his mind. This was reflected in his swimming, as he would regularly disappear under water for long periods at a time. As a teenaged lifeguard I was petrified. What if America’s greatest playwright was to drown while I was guarding the pool? After awhile I learned that was just the way he would swim, submerging himself under water while he moved forward with a type of odd dog paddle, coming up for air, and going under again, inching along for what seemed like hours. Other lap swimmers would even complain to me about him. One advertising copywriter from one of the major agencies bellowed out, “That crazy old man is ruining my swim. I am working on a Band-Aid slogan and he is stifling my creativity!”

I adored Williams. When I read “Cat on a Hot Tin Roof” in high school it changed my life. I realized that his plays, filled with drunks, queers and crazies were far closer to the world I knew than anything I had read before. After a few days he began to recognize me and I offered to open the pool early for him, so he could swim without being bothered. He declined. Later on I learned that he seldom got out of bed before noon.

As time wore on I took the role of one of his many caretakers while he was at the pool. Williams was usually in a walking stupor. He would sit on his glasses, run into doors and forget to put on his swim trunks and walk into the pool area naked. Yet there were also times when he would become lucid. This seemed to happen on Sunday evenings around supper time. The pool was usually empty and I would pull up a cabana chair next to him. He would gaze into the blue water and, as if looking into a crystal ball, his memory would return. He continually talked about Broadway in the 1940s, rarely mentioning the Hollywood days of Marlon Brando, Elizabeth Taylor, Paul Newman and Richard Burton. He did speak fondly of Joanne Woodward, saying that she was one of the most brilliant and talented people he had ever seen, and that it was a shame she had given up much of her own acting career in deference to her husband, Paul Newman. He also talked fondly of Chicago, especially the critics. “New York,” he said, “is a mean place. Chicago is much friendlier.”

Williams died in New York in 1983, a year after “A House Not Meant To Stand” opened to reviews that were critical, but kind.
Over the years artists and writers continued to flock to the pool. It was a regular hangout for many reporters from the Chicago Tribune, which was next door, and the Sun-Times, which was across the street. Sixties icon Donovan visited, and seemed to enjoy staring at the fountains, even though they no longer sprouted water. Chicago’s reigning mystery queen, Sara Paretsky, swam there almost daily.

In April of this year the Hotel Inter-Continental announced that the pool area has been renovated. “We didn’t have to do anything to the pool,” a hotel spokesperson said. “But we did put in new exercise equipment, a new sauna and locker rooms.”
In recent years the pool was only open to guests of the hotel. Now, anybody with of a love of swimming and architecture can swim in the pool for fifteen dollars. Even large hotel chains occasionally depend on the kindness of strangers.