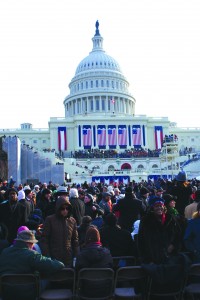 I’m seated on the United States Capitol lawn in front of the podium for an extraordinary occasion. A handful of Chicagoans are in my row of seats. In front of us, guests from California to Georgia. Spotted nearby, Academy Award winners Halle Berry and Forest Whittaker as well as former World Boxing Heavyweight Champ Evander Holyfield.

It’s high noon on January 20. Barack Obama, previously junior U.S. Senator from Illinois, former state senator from Chicago’s South Side and arguably now the world’s most famous living person, just became President of the United States of America according to the Constitution.

Many of us were in line to enter before 7am, seated by naval officers just before 8am. Waiting hours in twenty-degree temps this morning, “Hot Hands,” those little packets that heat up when exposed to the open air, are as coveted as inaugural-ball tickets. Guests nearby are stuffing the hot packets into their gloves and boots.

A slew of relentless Obama merchandisers have descended on D.C. for the festivities. With makeshift tents and folding tables lining the streets around The Mall, a potential branch of economic stimulus is in full swing as these mouthy merchants hawk a catalogue of predictable Obama gear: buttons, bobble-heads, pens, posters, paperweights and t-shirts. Some stretch the limits of good taste, pushing items capitalizing on the Obamas’ daughters Sasha and Malia while others shamelessly place our president’s image on items like toilet paper. And, no kidding, nearly every hungry vendor has a crowd. Even those who have strewn rough-hewn Obama t-shirts on the sidewalk are drawing business, fanning out stacks of dollar bills as they cut their gritty deals. 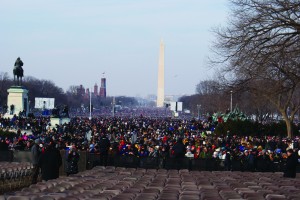 I could have only imagined this day when I first met Barack Obama, back when he was elected to the Illinois Senate in 1996, representing Chicago’s South Side from Hyde Park to South Shore. As a Chicago-based independent filmmaker, I worked with a group of local visual media industry leaders to gain legislative approval of Illinois’ first-ever tax incentive to attract more film, television and commercial production to the state. A state senator at the time, Obama was an important advocate of that legislation to create over 700 new jobs.

For the past two years, I worked in support of this historic campaign, witnessing close up not only the meteoric ascent of one of the most exciting candidates in our generation, but also the rise of a grassroots, community-driven movement that shattered fundraising models (and records).

Several hundred supporters joined Obama at the Old State Capitol in Springfield to announce his presidential candidacy on a frigid February day in 2007. On this even colder day, less than two years later, The National Mall, spanning nearly two miles from the Capitol steps to the Lincoln Memorial, is a scene resembling the closing montage of Return of the Jedi. A jubilant crowd, so dense it appears digitally enhanced, their hands and voices raised to the sky, waves little flags wildly.

As our new president rises from his seat to take the Oath of Office, guests nearby are pulling up CNN and MSNBC reports on their iPhones. “They’re watching this live in Kenya,” one says. “People in Europe are sending their best wishes,” reports another. Normally jaded A-listers are giddy with excitement, some holding up their phones to take pictures, like 12-year-olds with backstage passes at a Miley Cyrus concert. 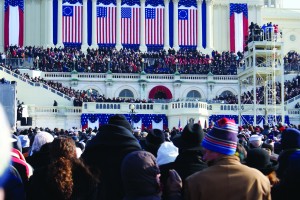 I first arrived at Reagan National Airport on Saturday with several state legislators and Mayor Daley. My visit to Capitol Hill that afternoon included dropping by the office of Illinois’ new junior U.S. Senator Roland Burris.

It’s interesting to see Senator Burris in his office and to watch people greet him the next few days. Thanks to a two-week frenzy of press coverage and appearances on nearly every major talk show, Senator Burris arrived in his Capitol Hill office as a widely recognized member of the senate and even enjoys a bit of celebrity status.

“He’s embraced by nearly everyone we meet. He’s in demand by major talk-show producers and gets a ton of interview requests. Right now, Senator Burris is a fascinating public personality,” says top Burris advisor Jason Erkes.

Police begin closing streets around us as we walk from the Capitol and through downtown Saturday evening. Our cab pulls through an intersection on Pennsylvania Avenue near the White House, followed by a squad car that sounds a siren screaming like Godzilla and blocks off both lanes, spinning a bright alert of red and blue.

Walking is tricky too. By the time we reach the next corner, it is blocked off by metal fences and we’re rerouted three blocks. D.C. officers and other security personnel are at every intersection. I ask a nearby guard in camouflage how to get to the closest Metro from here.

“I don’t know. I’m from Brooklyn. Sorry. A bunch of us here are from New York,” he says.

By Sunday, the first day of the “Renewing America’s Promise” inaugural celebration, crowds poured into D.C, security amps up and traffic succumbs to a few days of epidemic gridlock.

Getting near the steps of the Lincoln Memorial is tough, even with credentials. Streets around The Mall are blocked off. A ten-minute walk is now over an hour. A lot of attendees are telling me they were in place five hours earlier.

Later Sunday evening, it takes me ninety minutes to hail a cab and push halfway around DuPont Circle near my hotel on the way to Chicago’s Inaugural Reception hosted by Mayor Daley.

We stall in a herd of cars and perturbed horns, so I bail on the cab and jump on the Metro. My Metro stop is closed due to security preparations. I exit one stop after my stop, emerge from the multitude and walk more than a mile to the Mandarin Hotel for the reception where Chicago’s business and political heavy hitters pack the downstairs ballroom.

I chat for a few minutes with Lieutenant Governor Pat Quinn. While few inaugural guests are talking about the Blagojevich scandal here, many are already referring to Quinn as “governor.”

Monday’s focus is the national day of service. Invoking Dr. King, Obama had issued a call to volunteer service weeks earlier and begins the day helping to paint a youth center.

I work with the Veterans for America to help promote the Veteran Survival Guide, a resource to assist vets with navigating the vast requirements to receive full benefits from the U.S. Department of Veterans Affairs. We spend the afternoon handing out flyers and talking to veterans about their ongoing education as well as housing and health care.

The Illinois State Society Ball Monday night is jammed to capacity. On the way to dinner, we make our way through what seems to be a thousand formally dressed guests throughout the lobby already waiting for the ball, slated to start in two hours.

After dinner, they stream down the escalator and the stairs while a security contingent scans their tickets and directs the heavy flow of high heels and patent-leather shoes.

Later that evening, it is on to the Newseum for the celeb-heavy Huffington Post party. The logjam at the door steps aside as security whisks in the Jonas Brothers. Teri Hatcher does interviews on the red carpet while comedian Sarah Silverman, activist actor Michael J. Fox, CNN host D.L. Hughley and Emmy-winner Dana Delaney make the rounds. I exchange greetings with a very fit Jennifer Beals (“The L Word”) before having a few minutes to talk “Frost/Nixon” with director Ron Howard. Howard’s latest project is said to be a Best Picture contender. “It’s a hard movie to market, based on a series of interviews,” Howard says. A couple days later, the movie gets the nomination. 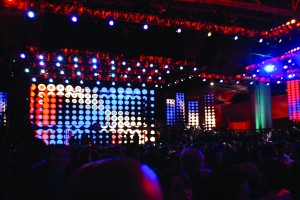 Tuesday night, we make the rounds of official inaugural balls. Beyonce sings “At Last” for the First Couple’s first dance at the first-ever Neighborhood Inaugural Ball, an event for Washington D.C. residents.

At the Home States Ball, attendees hop around three different stages. A band plays a bluesy set up front. Then the spotlights hit the main stage in the back where the presidential seal hangs and Vice President Joe Biden and Dr. Jill Biden materialize onstage. As soon as the Bidens waltz off, a stage to the left side of the ballroom lights up and musician Jack Johnson pops out.

“I just met Barack Obama backstage. I’m star-struck and my palms are kinda sweaty,” confesses Johnson as he tunes up with his band mates.

As the inaugural balls wrap late night Tuesday, streets around the Convention Center are blocked off, downtown bars, in twenty-four-hour mode, are filling up and cabs are nearly extinct. So we walk nearly ten blocks to the D.C Billy Goat for the “Cheeseburger Ball” hosted by former Illinois Dem Party Chair Gary LaPaille.

This party is rocking. A DJ replaces the bands and orchestras. He’s playing “Bust A Move” by Young MC as we enter. Tuxedos and ball gowns line up again, this time for the “double-cheese” and chips.

You can hear the familiar refrain all night as the grill man does his bit. Double-cheese!” “No Pepsi. Coke!”

Back outside, we flag down a private driver in an Escalade and aggressively negotiate a ride back. It comes to forty bucks. Not bad, all things considered.

Not bad at all.