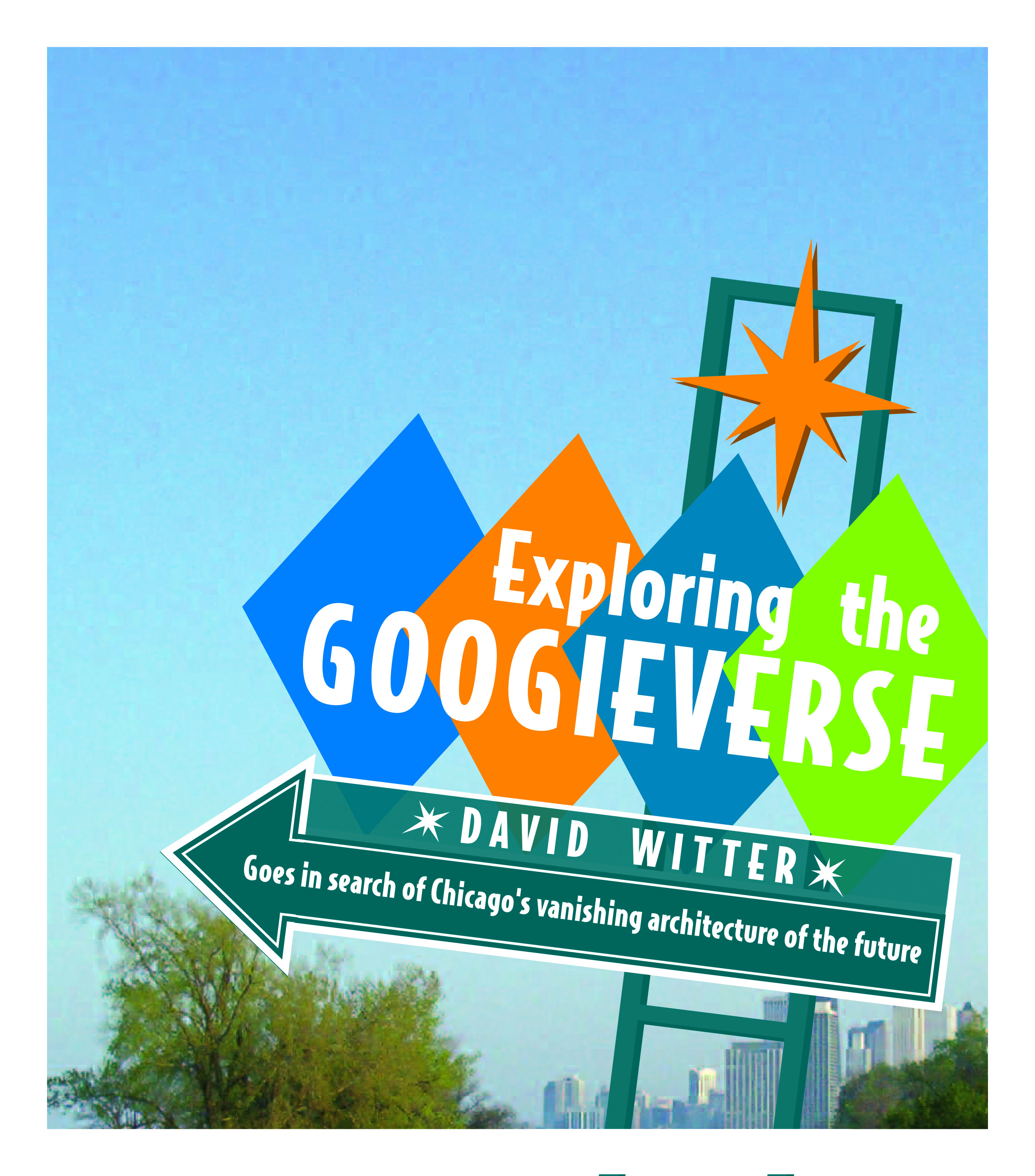 Born out of the same post-World War II energy that spawned the swirling, splayed chaos of Jackson Pollock’s paintings, Googie architecture celebrated the ascension of America and the atomic age. No longer was great architecture limited to banks, opera houses, mansions and downtown structures. Instead, Googie, which is also known as RayGun Gothic, Populuxe and Doo-Wop, transformed buildings like coffee shops, motels, gas stations and dry cleaners from simple boxes to giant, saucer-shaped structures with oversized signs splashing bold, pastel colors. To anyone driving down a highway or city road, Googie transformed the bleak horizon with buildings sporting upswept roofs, boomerang and saucer shapes, neon and large, plate-glass windows. Googie especially celebrated science and space, as structures in the shapes of amoebae, atomic models, stars and planets, all advertised with neotype signage, typified Googie. Like Art Deco and Bauhaus, the influence of Googie was not confined to architecture. Cartoons like “The Jetsons” and later “The Incredibles” used the Googie motif. So did the beehive hairdo, cat-eye sunglasses and tailfins on fifties-era cars.

While Googie generally proliferated in the postwar boomtowns of Los Angeles and its neighboring Orange County and Las Vegas, Chicago does have its share of Googie structures. Many of these are on Chicago’s far Northwest Side, an area that was largely developed in the 1940s and 1950s. These include Trim N’ Tidy Cleaners near Austin and Higgins Avenues, Superdawg, at Milwaukee and Devon Avenues and the LP Motel at 4605 North Harlem Avenue. Other Chicago Googie structures include The Ohio House Motel at LaSalle and Ohio, and Pride Cleaners on E. 79th Street in the Chatham neighborhood. Chicago also has another link to Googie. Architect John Lautner, known as the “father of Googie,” spent six years under the tutelage of Frank Lloyd Wright and his protégés as the recipient of Wright’s Taliesin Fellowship in the 1930s. 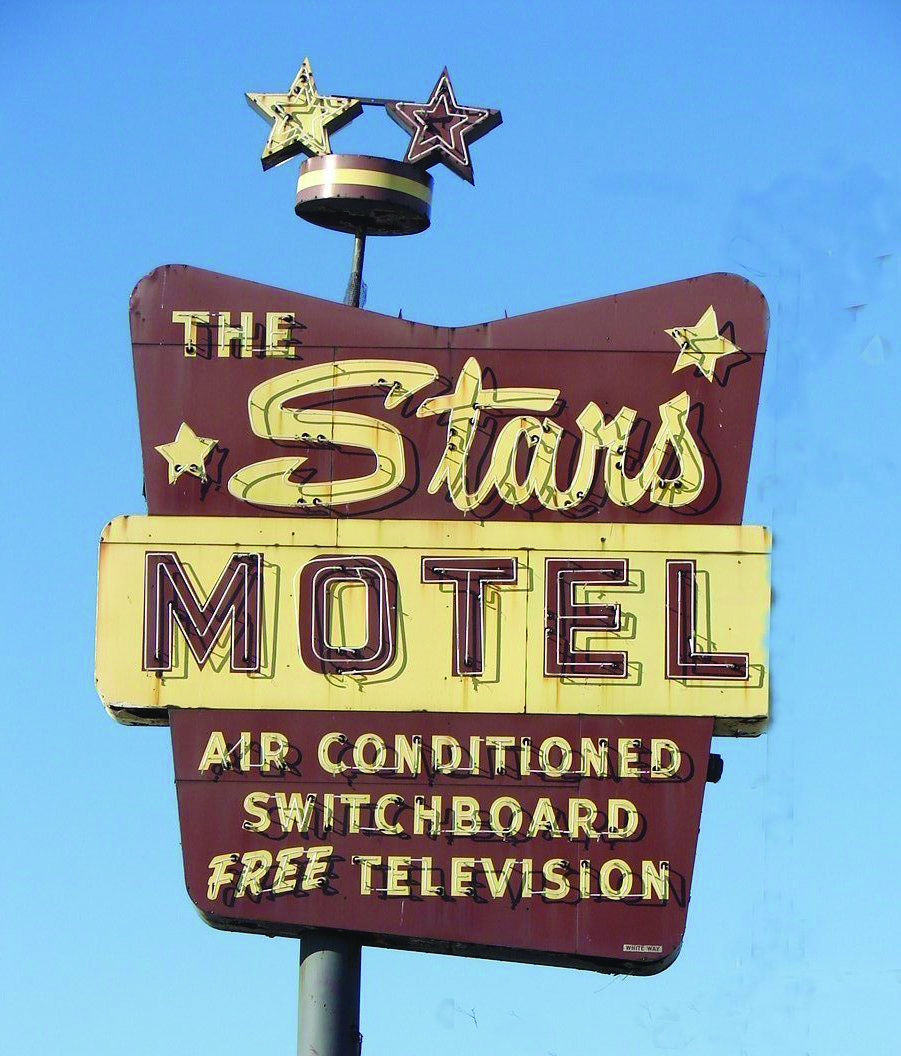 Like many artistic movements, there is no one place where Googie actually began. According to Spaceagecity.com however, the term itself originated as Yale Professor Douglas Haskell was driving through Los Angeles with architectural photographer Julius Shulman. When they drove by Googie’s Coffee Shop on the corner of Sunset Boulevard and Crescent Heights he yelled, “Stop the car! This is Googie architecture.” He later used the term in an article in House and Home Magazine, and it stuck.

Googie’s Coffee Shop was designed by Lautner. The subject of the recent documentary, “Spirit of Architecture,” Lautner supervised the construction of two Wright buildings, Wingspread and the Sturges House. Many of the elements of Googie include Wright’s incorporation of nature.

“Man’s continuing link to nature was expressed in a number of ways, including the common use of rock and fake rock, [flagcrete] walls, lush landscaping, indoor gardens, and vast plate glass windows that broke down traditional barriers between inside and outside,” writes Chris Jepsen of spaceagecity.com. “In the world of Googie, it’s not uncommon to see UFO-shaped buildings with one rock wall, three glass walls and palm trees growing straight up through a cutout shape in an overhanging roof.” 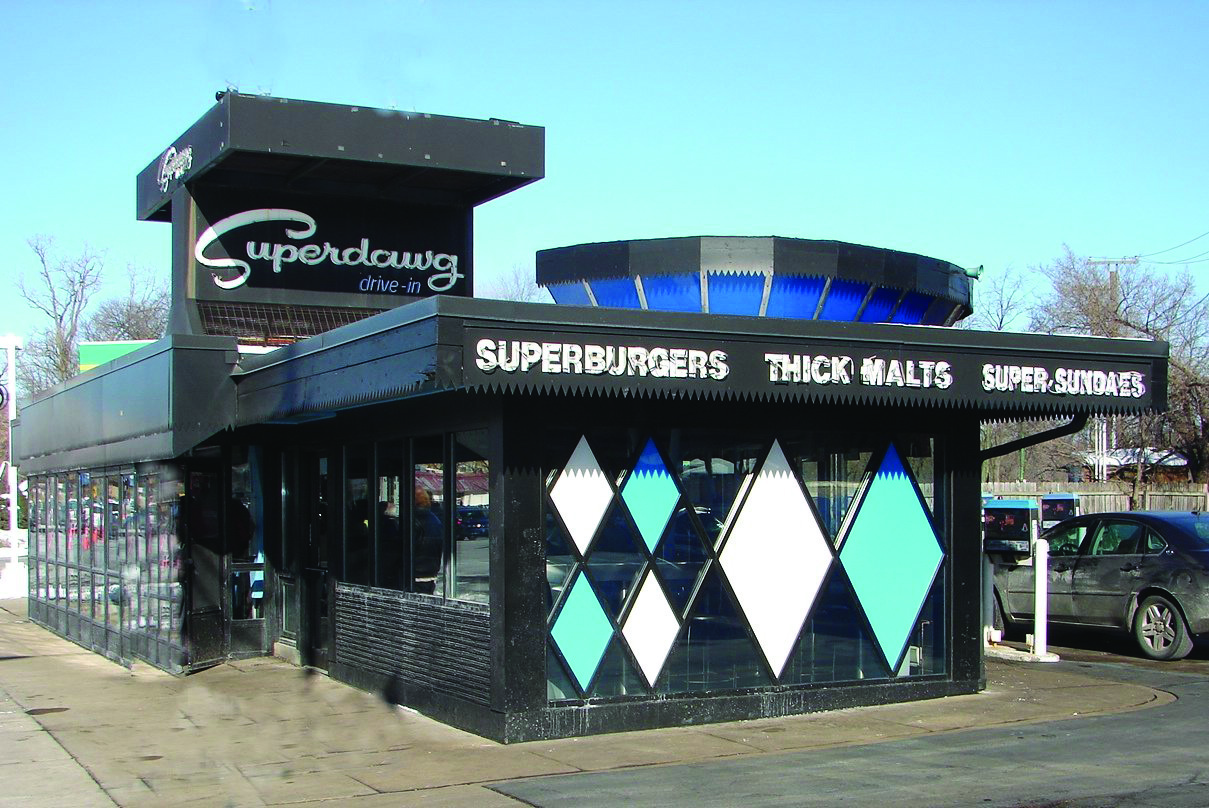 Googie is far better known for its use of bold pastel colors and designs that reflected America’s fascination with space, atomic energy and the promise of the future. In the book “Googie: Fifties Coffee Shop Architecture,” author Alan Hess writes, “The public was captivated by rocket ships and atomic energy, so in order to draw their attention architects used these motifs for their work. Buildings have been used to catch the attention of motorists since the invention of the car, but the 1950s took it a step further and created a genre of architecture that was used exclusively for the roadside service industry.”

One reason why Googie architecture never really flourished in Chicago is the number of classic structures that had been designed between 1890-1929. Masters like Louis Sullivan, Henry Hobson Richardson, Wright and many others had already changed the face of modern architecture. Chicago was, in effect, a canvas that had already been painted.

“Chicago is known for its classic architecture, and a somewhat more conservative and serious tone,” Joan Gand of Chicago Bauhaus & Beyond, an organization dedicated to preserving mid-century architecture, says. “You did of course have Mies van der Rohe and the revolutionary modern architecture of his school, but Googie was still considered to be a little too radical, as well as “lightweight” or fun for the Chicago market. So even though Lautner was from Michigan and was influenced by Wright, he and many other Googie architects went out West where they had more choices.”

With its El trains and compact downtown area and old neighborhoods, the influence of the postwar car culture also had far less effect on Chicago. Nevertheless, if you look hard enough you can find a number of Googie structures in greater Chicago.

The Ohio House Motel, 600 North LaSalle
The Ohio House Motel was built in 1960 and features almost all of the elements associated with Googie. Most notable of these is the use of jagged flagstone rock on its South and West walls, and the floor-to-ceiling windows beneath it, illuminating the influences of Wright. The white diamond, triangular-shaped rooftop, made out of pressed aluminum, gives the building a space-age feel. This diamond/triangle theme is reinforced in the hotel’s sign. As Googie was named after a coffee shop in Los Angeles, the Ohio House Motel features its own, sixties-era coffee shop, one of the few places to have an inexpensive breakfast in River North the Loop. Note the lettering on the coffee-shop sign. 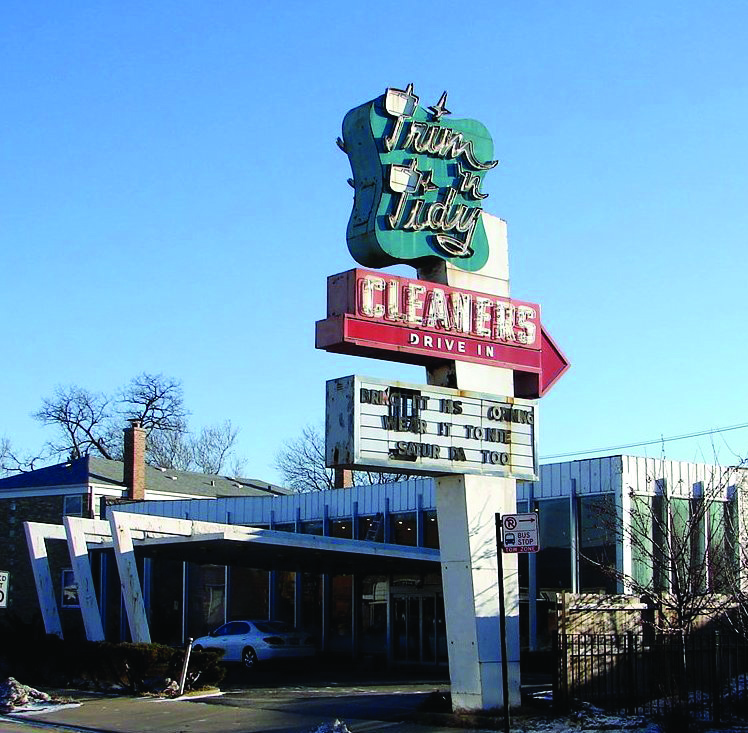 Trim N’ Tidy Cleaners, 5939 West Higgins
The sky blue, palette-shaped sign suspended from a steel post two stories above the ground gives this building its Googie props. The lettering on the sign, which uses stars to dot the eyes and the red arrow underneath are also vintage Googie. The building, comprised of three giant steel L-shaped arches over a wide drive-through area (remember cars baby, cars), seems like something straight out of Southern California. Behind this frame is floor-to-ceiling glass with thin, vertical white steel beams, giving it an airy, spaceship look.

Pride Cleaners, 558 East 79th
Spotlighted by architecture critic Lee Bey on WTTW and a later YouTube segment, Pride Cleaners is also textbook Googie. Built in 1959 and designed by Chicago architect Gerald Siegwart, the triangular-sloped roof juts out into the sky like a giant skateboard. Underneath is a floor-to-ceiling glass structure supported by aquamarine trim. The sign, which features lighted teardrop letters in lime green, avocado green, orange, pumpkin and baby blue is something the set designers of “Austin Powers” wished they would have stolen. 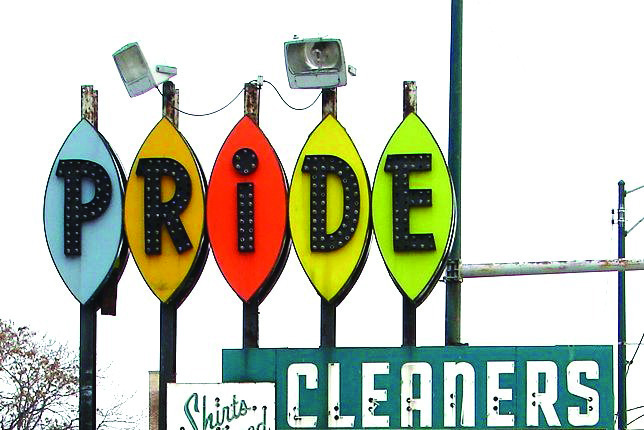 Other Googie buildings that can be found in Chicago and its outskirts include the BP Amoco Station at Clark and LaSalle, which boasts a spaceship-like overhang reminiscent of the LAX theme building; Superdawg, located at Milwaukee and Devon, combines classic Googie colored triangles with a blue neon roof that looks like a spaceship, lots of glass, the fiberglass hot dogs, Maurie and Florie, perched atop the roof, and brightly colored, triangular packaging that all of Superdawg’s food is served in; the Cindy Lyn Motel at 5029 West Ogden in Cicero, which boasts a funky semi-Googie sign and a long overhanging roof; and the LP Motel at 4605 North Harlem. Located just over the Chicago border in Harwood Heights, the LP Motel boasts a long white carport suspended by lithe, narrow columns, floor-to-ceiling windows, an overhanging sundeck and an orange, shield-like sign. All in all, the place has a definite early 1960s vibe like it was plucked off of Santa Monica’s oceanfront motel strip and transported to Chicago. Another odd but true-to-form example of Googie is a bus/train stop shelter located near Devon and Lehigh Avenues, about a half mile east of Superdawg. Complete with slanted overhanging roofs, large windows and a space-age feel, the choice of a bus shelter is a perfect example of Googie’s tradition of structures designed for use by everyday people. 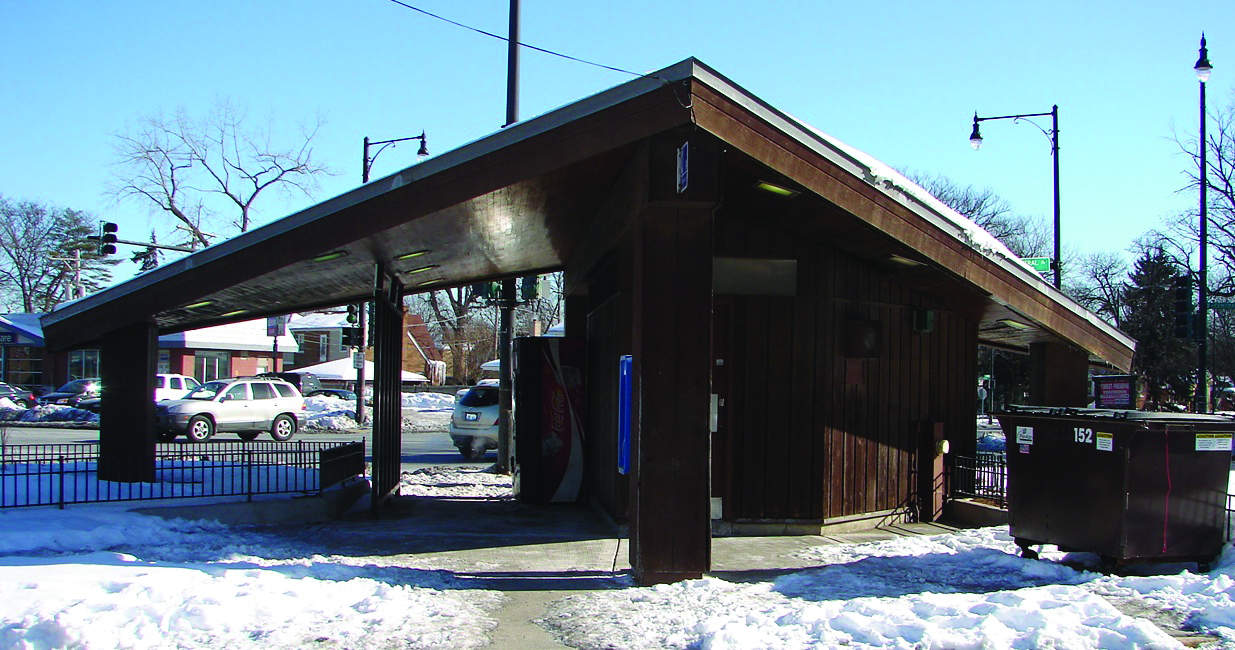 “As for private homes, there are some other examples of Googie-influenced homes in the Budlong Woods area near Foster and California, as well as in West Rogers Park,” Gand says. “Also, buildings like IHOPs and Denny’s, especially the older ones, have a lot of Googie characteristics.”

Besides architecture, Googie also influenced the fashion and culture of the 1950s and early 1960s. Items like the Googie or Populuxe ashtray, which is basically an upside down satellite with the top cut off and the base raised by the antennae, were mass-produced by the Pal-Bell Company. Googie also had its effect on the world of fashion, furniture and the arts. Short, brightly colored dresses with atomic and other geometrical shapes, high, shiny boots and purses, and beehive hairdos (think Kate Pierson, the redhead from the B-52’s) exemplified Googie. Men’s shirts with high, semi-rounded collars and white shoes and belts made of vinyl or other materials (George Jetson), were the trademarks of men’s Googie. Although most of the Googie articles have long since vanished, retro and resale hunters can still find many of these 1950s gems at stores like Store B, at 1472 North Milwaukee. 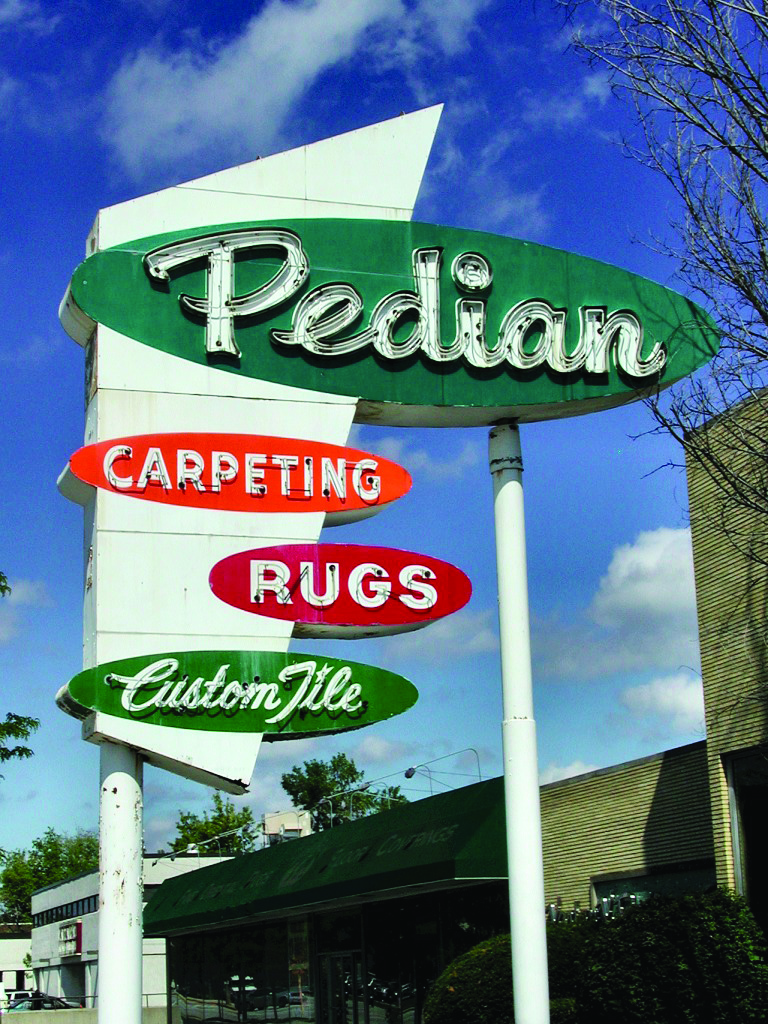 Chicago has recently lost many of its great Googie structures, including The Stars Motel, at Lincoln and Jersey, where only the sign remains. The Seville Motel, 91st and Stony Island, and Pedian Carpets, at Lincoln north of Devon, vanished sometime during the fall. While it was not taken seriously until the 1970s, groups of Googie supporters on the West Coast have rallied to save many Googie buildings, including a Denny’s in Seattle. Googie lovers are hopeful that Chicago can retain structures like The Ohio House and Pride Cleaners, yet the preservation of Googie is up against a unique problem.

“For most buildings to be considered architecturally significant, they have to be at least fifty years old, an age which Googie is just starting to reach,” Gand, who also works in conjunction with organizations like the Chicago Architecture Foundation says. “Yet in recent years organizations have fought to preserve Googie architecture in Los Angeles, and things like the documentary on Lautner may raise awareness for Googie. Hopefully, Chicagoans can save some of their Googie structures, which show us that architecture can not only portray a new, bold vision, but have a sense of fun as well.”