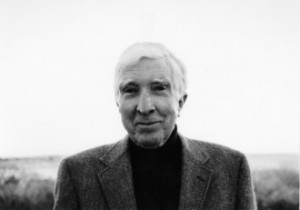 In an era of specialists, he stood alone as America’s last great man of letters. In addition to his nearly two-dozen novels, story collections and a shelf-full of poetry, he wrote on American presidents, the cosmos, science and gadgets. In an era of identity politics, he refused the limitations of skin. Fifty years after he published his debut novel, John Updike—America’s most gifted twentieth-century observer of the currents of this country—is gone.

It is hard to describe the vacuum his departure creates. He sprung into the world fully formed, publishing his first poem in The New Yorker when he was just a senior at Harvard University, following up with a torrent of “Talk of the Town” pieces, and then the glorious string of short stories remembering—and creating in readers’ imaginations—the imaginary Pennsylvania town he called Olinger.

The knock on him—as it was with contemporaries Norman Mailer, Saul Bellow and Philip Roth, only one of whom remains today—was that he was a solipsist. But in the pages of his early collections, “The Same Door,” “The Music School” and, especially, “Pigeon Feathers,” Updike proved what miraculous things were possible from the close study of what one knew best.

From his perch in Massachusetts, where he moved in the late 1950s to escape the artistic mercantilism of New York, Updike breathed life into one of America’s most enduring fictional characters: Rabbit Angstrom. Through the eyes of this unapologetically provincial car salesman, Updike tracked the upward and outward thrust of post-war American life.

Taken as a whole, the five books Updike wrote about Rabbit won him every major literary prize available to an American writer. More importantly, they dignified the din and often unlovely consequences of this country’s robust capitalism: The seepage of greed into a man’s personal life; the corrosion of small-town life before big time dreams; the cushioning of empathy created by plentitude.

So often is Updike identified with Rabbit that during his lifetime he was confused to be a living embodiment of his character’s values. The truth couldn’t be further from the case. Although his fame as a literary writer was enormous, Updike remained a self-professed amateur. He happily reviewed books by writers from around the world, including those of Americans many decades younger than him, well into his middle seventies.

I had the good fortune to interview him six times. He was frighteningly articulate, unimpressed with himself, solicitous even in the face of the most prying questions. He possessed a twinkle in his eye, as if this miraculous zeppelin of work he launched weekly into the pages of magazines and yearly onto the shelves of bookstores was an act of mischief.

The truth was he knew how much was at stake in the act of writing—that what we dream in the pages of books conditions our appetite for the world. He gave it back to us, sentence by beautiful sentence. And unlike so many givers, he seemed to make it seem easy, as if the act of doing so was its own reward. That—more than the decades of sex which parades across his pages—explained the shine in his eye, so sadly dimmed forever now. (John Freeman)