by Brian Hieggelke
February 10, 2009Filed under: 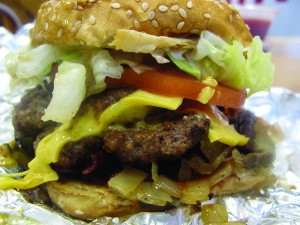 How many guys does it take to make a great burger? Based on my recent experience at Five Guys in Oak Park, it’s definitely more than five. Of course, quantity probably doesn’t matter, as McDonald’s Corporation employs hundreds of thousands of people and they’ve yet to get it right.

Actually, the number of folks it takes to make a great burger probably isn’t as philosophical a question as how many licks it takes to get to the center of a Tootsie Roll pop. There’s no doubt in my mind the best fast-food burger available in Chicago these days can be found at Marc Burger in the food court at Macy’s on State, and that burger was invented by one man, chef Marcus Samuelsson (C-House).

So what’s wrong with the Five Guys patty? It all starts with cooks who use spatulas and grill presses to smash the life out of the beef. Once grilled, these well-done juiceless pucks look like Wile E. Coyote after one too many anvils to the head. While struggling under the weight of the press, the patties never really get griddled, but instead steam in their own juices.
You also wonder why a place that cooks patties to order makes their burgers well done, but at Five Guys, it’s not really a secret. Their corporate Web site answer is “By cooking all of our burgers juicy and well done we are able to achieve two goals: Insure a consistent product [and] Meet or exceed health code standards for ground beef.”

Translation: we don’t trust our training programs or our grill cooks to do a good job, so instead, we’ve decided that cooking the living moo out everything we serve is the only way to succeed.

I’d give them slack on this point, but the high-volume Marc Burger grill manned by everyday hairnetted joes somehow manages to turn out perfect, juicy medium-pink beauties one burger at a time and have so for a while.

Lest you think this is the sound of one man typing, one of my good friends, a non-food-writing burger aficionado, suggested that the Wendy’s double is better than the Five Guys burger. I was skeptical, but as I reflected on it, he’s right. The Wendy’s burger (also fresh, never frozen beef just like Five Guys) sports discernible grill marks, good seasoning and a flame-broiled taste. The dense grayish mass at Five Guys tasted as if it hadn’t come within ten feet of a saltshaker.

Even the squishy sesame-seed bun here, which disintegrates under a dollop of mayo and gooey cheese, isn’t much more inspiring than the patties. If I’ve learned anything eating hundreds of burgers in my lifetime, the greatest buns are usually of the potato variety and are best when toasted and topped with a touch of butter, as at local chain Culvers.

The skin-on fries at Five Guys are decent (though much better ones are available at Hot Doug’s or Susie’s in Irving Park), but at $2.59 for a “regular” portion they’re kind of pricey. Five Guys would be better off cutting the portion size and the price in half.
This all being said, the real central question of Five Guys is not how many folks it takes to make a great burger, but rather, how can so many well-respected news outlets can be so hoodwinked into loving it?

Where some burger joints might hang framed prints of scary clowns or fat purple blobs, Five Guys has culled over twenty years of good reviews and posted mini-billboard-style excerpted quotes from the Atlantic City Weekly to the New York Daily News. On one wall, you’ll find a decade or so of successive reprints of the Zagat guide fawning over Five Guys.

It could be that all of these signs work as a form of mind control, but I suspect Five Guys’ success is actually a function of cheap nostalgia and relatively sad competition. Up against the garbage served by mega chains, save Wendy’s, the flawed Five Guys burger is much better.

More than anything though, Five Guys is also capitalizing on the East Coast’s and Midwest’s yearning for the glorious burgers of West Coast chain In-N-Out. Absent their gooey animal-style patties, we settle for second best.

One thing Five Guys has going for it is crispy bacon and oozy cheese and a menu of condiments (any and all free with your burger purchase) that makes the salad bar selection at Whole Foods jealous (golden-fried onions are best). But this is just lipstick (on a cow?). And as we learned last November, when you put lipstick on something, all you end up with is a rifle-toting civil-liberty-revoking hockey mom who can see Russia from her backyard.

Five Guys is located at 1115 Lake Street, Oak Park, and at 2140 North Clybourn in Chicago.