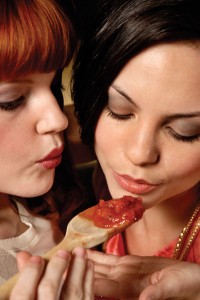 In 1995, the age of consent in Michigan was 17. I learned this when I went to my job waiting tables at Thomas’ Family Dining on the first day of April of that year, and was met with a trio of sidelong glances and mock-enthusiastic birthday greetings from behind the line, along with one half-serious inquiry as to my plans for the evening.

To date, the bulk of my practical sex education had come unsolicited from Roxanne, a colleague at the restaurant—the most popular with customers for her flirtatiousness and bawdy humor—who volunteered reports on her scandalous escapades with Jason, one of the line cooks. Roxy’s graphic tales of quasi-public fellatio and odes to Jason’s masculine endowment threw unwelcome technical illustrations into my soft-focus fantasies of deep, reclining kisses with an anonymous figure—Golden Age of Hollywood scenes that grew blurrier as passions heightened and three-piece suits melted away. In truth, the image of foul-mouthed, full-figured Roxy in flagrante delicto with the unremarkable young man behind the broaster did little to spoil my conception of sex. Anyway, Jason was coarse, brutish and as dim as the bulk of my male classmates. It was Chris who kept me looking forward to pouring sodas and assembling breadbaskets for the elderly of Livonia. Tall and slim, shy, with dark hair already retreating a bit at the temples (like Cary Grant or any sophisticated man suffering from an excess of testosterone), a few curls of chest hair visible at the neck of his tee shirt, Chris was the only other line cook in his twenties who hadn’t done time. At least that I knew of. Our fleeting exchanges through the pickup window, about toast or the temperature of fries, were hampered by my downcast gazes and nervous watch-twiddling; the crystalline moments when he left the kitchen to fill his glass at the chocolate-milk dispenser had me walking into corners for a half-hour afterward.

Chris asked me out two weeks after my birthday and three days after a phone conversation—monologue, more accurately—in which I mourned, between sobs, my own inevitable loveless, virginal death. Yet like an act of God, on my next shift, Chris walked out of the kitchen as I was folding my apron and inquired if I was free over the weekend. I was. We exchanged numbers and about six hours later I realized that I had been asked, with no detectable sarcasm, on a genuine date by a man. A man I’d harbored a debilitating crush on for months. A man who developed a five o’clock shadow each day around five o’clock.

The possibilities of the universe yawned before me; if this incredible person were interested in spending recreational time with me, there was hope that I might taste a kiss before withering into half-mad crone. But that entailed a date. What happens on a first date? None of Roxy’s crude, utilitarian encounters certainly, but still, this was an older guy; how much older I wasn’t sure…old enough to bet on horses at the Northville Downs, old enough to legally order a beer at the windowless bar on the far end of Thomas’ parking lot. Did he know he had made plans to attend the Michigan State Fair with a high-school senior, an awkward child-woman—hungry, yes, hungry for five years now—but who hadn’t so much as thumb-wrestled with a member of the opposite sex?

Perched in the passenger seat of his pickup, painfully aware of every cell, I hid behind questions. It was easy to do; this powerful, relaxed human being was a mystery. Little splotches of detail appeared as we chatted, driving aimlessly, lost in the web of freeways that form the skeleton of Detroit. He was a farm boy from Ohio, never went to college. Wanted to deal cards in Las Vegas someday. Devotee of the Beatles, Billy Joel and a band I’d heard of in passing: Dave Matthews. On our fourth lap across the downtown stretch of I94, we pulled off the interstate to ask directions to Woodward Avenue. He locked the doors and I waited in the truck, mortified at my ignorance of this city I took fierce, underdog pride in. The gas station clerk was no help, but a passerby offered to divulge the whereabouts of Detroit’s central artery for a small fee. We found the fairground minutes later—a massive, shapeless expanse of lawn facing a cemetery that extended to the horizon.

I remember my limbs working jerkily as I lurched across the grass beside him like a newborn calf, the left side of my body tingling at his proximity. I was aware of his breath as we leaned over the rope guarding a life-sized cow sculpture carved from a solid block of butter. On the midway, a silver-tongued huckster held him captive for at least twenty minutes, tossing darts at balloons taped to a pegboard—the exchange rate of darts and dollars that passed in a steady stream across the table never quite clear—for a plastic-framed mirror, painted with a portrait of Elvis. Too polite to disentangle himself from the encounter and too timid to refuse the prize, he took the garish object in his left hand, my hand in his right and we spent the next half hour trying to pass the painting off to unattended children dashing between rides.

The palm of his hand was strong and warm. His fingers interlaced with mine, their blunt tips reaching halfway up the back of my hand. I felt the fragile skin between each digit. The thick pads at the base of our thumbs and the heels of our hands pressed firmly together, creating a hot cave between our palms. My pinkie finger curled around his outermost knuckle; his thumb embraced the root of mine in a gesture so comforting I would not experience its like until the first time I drifted into sleep laying on my side, a bare arm draped over mine, a lover enclosing my back like a shadow.

The clasp may have lasted only a few minutes. I broke it, masking my fear by taking Elvis from his grasp and propping him against the driver’s side door of a red model sedan on arbitrary display. We sat on a bench in the vacant bandshell as the light faded. He was quiet by nature, but the conversation flowed easily, the silences brief and not uncomfortable. He drove me home a few hours later, turned off the headlights as we pulled into the driveway, shut off the engine and walked me to the house. A soft glow escaped from the living room, illuminating the glass panel in the front door. I stood looking up at him, my back to the house. He thanked me, strangely, leaned forward and gave me a hug. He returned to his truck, waiting to switch on the headlights until he’d cleared the driveway, and drove off.

There was one more date with Chris—dinner, a movie—unremarkable, pleasant. We parted that evening same way, the same hug. The shifts we shared at the diner after that were warm, affable, but each time I called his house the phone rang until I hung up.