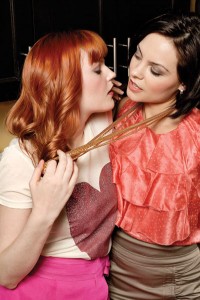 I abandoned the boyfriend in the streets of Orlando, two hours away from our home in Gainesville. He poured beer in my purse, drowning my cell phone. He yelled at me in front of long-lost friends. He clung to pillars supporting gargoyles while he spat at invisible sharks in a goth club. He ham-fistedly shot me the bird while I drove away, slamming on the break to snap photos of his frustration. I condemned him to a Greyhound-station slumber party with a vagrant who taught him that manhole covers were nature’s pancakes.

My friends didn’t know how pathetic I was, that when the boyfriend would hear me knocking at his door and ignore me, I would whimper and throw acorns at his bedroom window. They didn’t know he often wished out loud that I was thinner than his ex-wife, whose father was our snoopy mailman who clearly broke many federal laws. They didn’t know that I called hospitals and jails frantically when he went missing for days on a secret “rendezvous.” The boyfriend and I lived in gray areas.

The Parliament House is an expansive gay resort including six nightclubs and bars, one full-service restaurant, a pool, a beach and a motel, among other amenities. It also included room 110, a very important hotel room, a hotel room for me.

I made friends with the drag queens with peacock eyes and they introduced me to their friend Juan. Juan was a Chippendale dancer, until a motorcycle accident left him paralyzed from the waist down. He was beautiful and buff, and the lingering adrenaline buzz left over from leaving the boyfriend in the streets only intensified his attractiveness. Several vodka tonics later, I hopped off Juan’s lap, and we left the queens in the club. He drove his car with his mouth and hands, limiting all conversation to stoplight length. He gave me a tour of his house, a desolate gray-tiled mansion with tiled wheelchair ramps, a huge-screen TV and a pool he couldn’t use.

I asked Juan how his penis worked. He said it sort of worked. He could get hard, but that was it. He couldn’t feel it. He was one vertebrae away from an orgasm. So I did what I could. A wheelchair is ripe territory for experimentation. Then we had a 4am root-beer float and breakfast sandwiches at Steak ‘n’ Shake.

Juan dropped me off at the gay resort to weep through “Sixteen Candles,” which I had never seen, though I told people otherwise many times. Room 110 was a surprisingly generic room. I did not expect a corner-mounted black-and-white television set. I certainly did not expect a sun-bleached, pastel beach print over the bed. I expected a little more style.
It was a long drive home.

When the boyfriend finally arrived, I had plastered his front door with photographs of him standing in the street giving me the finger as I drove away in my bedraggled Volvo. We lived in a duplex, he on top, me on ground level. I moved out that week, leaving him with a hippie subletter to whom I had bequeathed all of my furniture. I left behind my piano, my desk and my hunting-lodge-style itchy sofa.