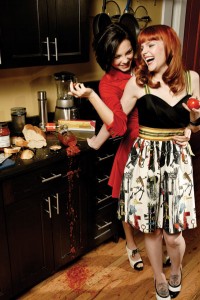 With Valentine’s Day fast approaching, I am doing what any normal single girl does—wondering why I, of all people, am dateless—unable to celebrate a holiday made for hopeless romantics just like me. I consider myself to be a fairly decent catch—I have all my teeth, no hair sprouting in places it shouldn’t, relatively intelligent…so what’s the problem? Then I remember “That Thursday Night At McGees”—the night that clued me into the fact that may be the problem. Not so much me.

I went to McGees on a Thursday night with a coworker—two single ladies out on the town. We were minding our business, sipping our $1 Bud Lights when Bachelor #1 approached. We felt his presence before we saw him—a tall dark shadow fell over our table. We looked up… and to our dismay, saw what can only be described as an, ahem, interesting stranger. With hair that had never seen a brush a day of its existence, a long brown coat with a fur collar and crooked teeth, he was no Brad Pitt, to say the least. But it was what came out of his mouth that was really appalling. Turning to my friend, he uttered the words he clearly thought every woman wanted to hear: “Shorty, what’s your numberrrrr?” She managed to politely decline his enticing request for her digits before falling into a complete fit of laughter. Seeing he had been rejected, he backtracked and asked for her name. “Hope,” she replied through giggles. Fed up with her lack of seriousness, he turned his attention to me. “Joy,” I said. Realizing that he wasn’t making much progress here, he left, searching for a new victim to romance.

Less than two minutes later, Bachelor #2 approached. His appearance was not so faulty—he looked like what I like to call a “granola guy,” ya know, the type that Paul Rudd played in “Clueless.” He paused, and we leaned in to hear what he might have to say. “So,” he began. “I’m kind of retarded. I get really drunk, and ask strangers for cigarettes.” Believing he was seriously just fiending for a puff, we told him we were not smokers, and therefore had no cigarettes for him to bum. Then his friend approached. “I’m sorry,” he began. “My older brother is kind of retarded. He likes to get drunk and ask beautiful women for cigarettes.” At this point, it became painfully obvious that this was a set-up—they had clearly huddled together, decided that one would approach, and the other would swoop in two minutes behind. Wait just a minute, I thought. You actually planned this encounter, put thought and effort into it, and the best opener you could come up with was, “Hi, I’m kind of retarded” between the two of you?

I couldn’t help but begin to think I’d been enlisted for an unsuspecting role on “The Pick-Up Artist.’” You know, that show on VH1 where a douchebag in fur, eyeliner and goggles by the name of Mystery “coaches” socially inept men on how to pick up women using the lamest lines imaginable. Enter Bachelor #3. We couldn’t help but laugh the second he approached—we, like most young women, have had our fair share of bad come-ons, but three in a row? Were we the only females in the bar? What the hell was going on?

This guy looked fairly normal, and didn’t say anything wrong—but he was so nervous, he could barely get through his question. “Uh, so,” he began. “Um, my, uh, friends and I were, um, sort of wondering…oh shoot, um….why, uh, you guys, might, ya know, um, be here, sort of um, you know, not really talking to any guys?” Not wanting to be bitchy, we listened patiently, if only for his nervousness—we don’t consider ourselves the type to be nervous about by any means, and dude was literally sweating bullets over here. “We’re actually just coworkers out enjoying each other’s company,” my friend said politely. “Oh. OK!” he said before practically running back to his friends. He was clearly relieved to have completed his mission—he needed stay no longer.

When I was tapped on the shoulder again a moment later, we couldn’t help but roll our eyes. “Excuse me,” said Bachelor #4. “I just want to know what that guy said to you girls?” He paused before continuing. “I just want to know what NOT to say, because I just watched you shoot down three guys in a row, and I don’t want to be the fourth.” Needing to share the strangeness that had just occurred, we humored him. We told our stories, shared some drinks, and eventually parted ways. He took a liking to my friend, and with no real spark between his friend and me, I was left, quite happily, alone.

I suppose I could continue to mope about my Valentine’s Day singledom—perhaps I am, plain and simple, too damn picky. But if that night at McGees is any indicator of what my options look like, I can quite honestly say that I, for one, will happily celebrate Valentine’s Day this year a single woman—at least until Mystery comes up with some better material!