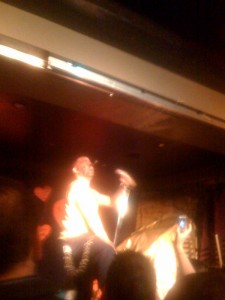 Friday the 13th and the small stage in the back of Cobra Lounge is decorated with adorable pink hearts of various sizes. A closer look reveals the red-inked words written across the hearts: “Your mom has a really pretty mouth. Sorry about the crabs. It ain’t gonna suck itself…”

The Sinstress Sideshow is hosted by the oh-so-beautiful Miss Maya Sinstress, who is endowed with the kind of large yet amazingly perky breasts romance novelists make millions fictionalizing. Throughout the night, Miss Maya and her girls continue twisting fantasy into a frighteningly sexy reality.

There’s the classic Bettie Page-alike, who shimmies around stage in slow motion. A duo performance depicting date rape is a huge crowd favorite, though it’s Miss Maya herself, sashaying across the stage with large feathers skewered through various parts of her flesh that leaves mouths agape. Hard to believe how sexy removing blood-stained spiked feathers can be.

But pasties, corsets and mini petticoats just can’t compare to the Reverend B. Dangerous. Wearing smeared greasepaint all over his face (think the late Heath Ledger in “Dark Knight,” but dirtier), and a tattered ringleader jacket, the Reverend immediately brings to mind a Pentecostal Snake Handler. Now subtract the snakes, add sharpened nails, power tools and a staple gun and you have yourself one crazy Southern boy.

The show begins with him stabbing a screwdriver into his right nostril. Ouch doesn’t even begin to describe the moment he takes a handheld power drill and drills into the center of his nose. A mix of awe and nausea flows over the audience when Rev. Dangerous pounds two nails into his face with a hammer.

He invites guest assistants from the audience up on to the stage. Several cringe and flat-out refuse, including a man well over six-feet tall and weighing a good 400, maybe 500 pounds. But the brave ones go up and join him. They staple his shirt to his biceps, and stand on the back of his head, forcing his face into a pile of broken glass.

Surprisingly, blood doesn’t spurt everywhere. It gushes a bit, drips a lot and causes thick globs to form on his self-promoting tank top. When he removes the hole-ridden shirt, thick nipple rings hang from his man-boobs. Naturally, Rev. Dangerous takes a metal chain, attaches it to a metal briefcase, and clips the opposite ends of the chain to each nipple ring. The Reverend straightens his back and swings the briefcase round and round.

But even this isn’t as bad as the heavy video camera he has tied to a bungee cord. Piercing his tongue with the sharpened hook of the cord, and ignoring the blood that fills his mouth and stains his teeth, he lifts the camera a few inches off the ground, and swings that round and round.

“This ain’t any of that Criss Angel bullshit up in here,” the Reverend reminds. “That motherfucker can suck a cock.” (Khaveri Campbell)