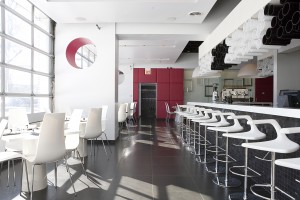 There’s just something about Bruno. And tonight, I aim to please him. How else explain that, though I’m a 32-year-old straight dude who shops entirely too much at Old Navy, I’m more skittish than a red-carpet-roving Hollywood starlet caught in the crossfire gazer beams of Joan Rivers and Steven Cojocaru?

Since I’m a food critic, Bruno Abate, restaurant impresario/owner of Wicker Park’s Tocco Pizze e Arte, should be the one to impress me. Yet I’m worried that my recently pressed white-stitched ultra-indigo dress jeans are slightly wrinkled at the ankle, and I’m wondering whether they drape over my pointy-toed Robert Wayne dress shoes enough to prevent me from looking like a court jester. Abate, who cooks from $8,000 San Lorenzo sauté pans, wears sunglasses that make Bono jealous and rocks orange shoes, has seemingly turned the tables.

A night at Abate’s restaurants… no, make that culinary emporiums, isn’t as much dining out as it is a catwalk prowl at fashion week in Milan. Whereas most restaurants pass off mediocre paintings or Crate & Barrel reclaimed white-painted twigs as décor, Abate’s first spot, Follia, was adorned with couture dresses from emerging fashion designers. Even though I lived a few blocks away, I didn’t stop in at Follia for a year, because I thought it was a clothing boutique.

This time around, Abate’s new spot, Tocco is more like a big-donor contemporary-art-museum opening celebrating a trove of recently discovered Warhols. An army of plastic resin chairs are filled with the affluent, and there’s a Magritte-like exhibit of empty floating picture frames lording over a mod dining room so sharp, it’ll cut you. Glass tables are lit by a trio of what look like giant Hostess Sno Balls, as well as the glow from an espresso machine tricked out with a neon-lit enclosure that would make the team at “Pimp My Ride” proud.

As I enter Tocco, Bruno is nowhere to be seen, and I only have to impress a sharp-eyed pixie-shorn hostess. Just in case my clothes don’t do the trick, I’ve also brought along a power couple, two Chicago radio producers, who I’m sure will earn me some cred. Somehow, we’re still seated in the unfashionable back corner between the kitchen and a huge cold garage-door-style window. That’s when the female producer, who’s disappointed because she’s recovering from a serious cold, confesses that she always gets seated near the busser’s station. Maybe that’s because, unlike a nearby waitress sporting a puffy cleavage-revealing peasant blouse scrunched tight by a leather corset, she forgot to dress in her best St. Pauli Girl-dominatrix chic.

Then again, I’ve got on almost as much black as our server, though my sweater isn’t quite as super-glued to my biceps. He looks like an underfed He-Man with his floppy blond hair and lean musculature, but proves he’s no meathead by rattling off the differences among four types of sparkling wines. Unfortunately the waiter’s wine genius is undone when he brings us a quattro formaggi pizza instead of the quattro stagioni we ordered. Thankfully we didn’t accept the mistake, as the stagioni, a cracker-crisp flatbread topped with olives, mushrooms, artichokes, cured ham and a runny fried egg, and tastes like what might happen if a croque-madame sandwich crashed into a vegetable farm, is one of the best plates of the night.

The radio producer’s bad restaurant karma doesn’t stay away for long though. The first to dig in to the polenta con funghi, a bland sandy corn meal dolloped with droopy ‘shrooms, she blames her cold for its tastelessness. Her fiancé and I, our sinuses clear, quickly assure her a super-taster couldn’t find seasoning in this dish.

Before I can regret bringing her bad ju ju along, we munch on a textural smorgasbord of crispy and wilted smoky grilled radicchio dripping in sweet Taleggio cheese. Now I have to thank her for her persistence, as I almost rejected the radicchio dish as veggie filler detracting from all the pork dishes on the menu I coveted.

Despite the stylish surroundings, the food at Tocco is unadorned trattoria fare. As such, there’s nothing to hide behind, as when basil, tomato, garlic and black pepper are tossed with slightly gummy overcooked pappardelle. You should skip the meager portions of pasta here, though, as you can score twice the amount of similarly priced higher quality noodles elsewhere. Excellent, simple execution is found in the Gamberi alla Montenapoleone, lemon-oil-bathed crispy shrimp so creamy inside that it’s hard to believe they’re fried and not poached in butter for hours.

While the dinner menu is as timeless as a Birkin bag, the dessert menu, which includes entirely too much ice cream and an apple tart, is as tired and gaudy as Z. Cavaricci pants. And, though it’s as clichéd as yelling “Free Bird” at a concert, we opt to split some flourless chocolate cake. On the way out the door, I spot the tall shiny pated Abate, sans his trademark sunglasses, holding court like a Versace-clad Nosferatu at the bar. The cake is such a satisfying fudgy dose of comfort, I don’t mind too much that he doesn’t even bother to look at me.