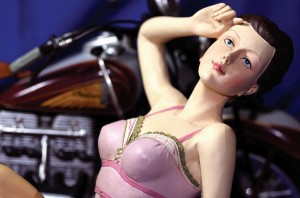 Where can you find six women in one room who would happily don a strap-on and take on a guy? Or a bar full of men who shout out the maximum distance they’ve managed to shoot a load?

Logan Square bar The Burlington is home to the monthly Sunday Night Sex Show, where creators and hosts Allen Makere and Robyn Pennacchia infuse your mind, libido and sense of humor with any and all things sex-related. In case you were wondering, the longest distance shouted was nine feet.

With the Sunday Night Sex Show celebrating its sixth month in existence, it’s no surprise to find that most of the audience members are regulars and well acquainted with Pennacchia and Makere. The room fills up quickly and nearly every seat in the place is occupied.

In between the various questions and naughty prizes, local writers are given the chance to read short works of creative non-fiction about their past and current sexual experiences. While most of the writers seem to be Fiction Writing students from Columbia College, anyone with a fun and wild tale of sex, or attempted sex, is encouraged to read.

Audience members are encouraged to write and anonymously submit questions concerning sex and relationships. The audience is also asked to participate if they know an answer or at least have a suspicion about it, and everything is open to a fun, laugh-filled debate.