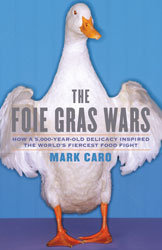 He might eat foie gras on occasion, but even if you’re an animal-rights advocate, there’s no question that Mark Caro is a great human being.  The Chicago Tribune scribe and author of the new book “The Foie Gras Wars” gave a reading at Borders in Lakeview last Thursday. He opened the affair with a duck joke told by his young daughter, which engendered a bout of crying from his other daughter who was a tad jealous of her sibling’s moment in the limelight.

As the father of a 2-year-old, I’m pretty sure I would be terrified and would be shuttling off my son in a similar moment.  Instead, Caro gallantly humored his daughters, and continued to allow their occasional involvement, while he entertained with rapturous story and smartly answered questions for over an hour.

Most engaging was Caro’s sincerity and his commitment not to point fingers, but to explore the foie gras debate fairly.  One of the most disappointing parts of the whole foie fracas for me was that many of the anti-foie forces I spoke with had questionable motivations and didn’t even really seem to care about the ducks as much as they did about raising their own images.

For example, last year when I interviewed the foie gras ban’s chief proponent, Alderman Joe Moore, and asked if he had ever eaten foie gras, he gave me a Bill Clintonesque waffling answer, saying, “I may have. I didn’t know what I was eating. But I am told by a friend of mine that dined with me at one of our trendy restaurants, a while back, this is before the controversy kinda blew up last year, that it may have been part of an appetizer that was served to us. But I honestly can’t remember it and I can’t remember what it tasted like.”

Likewise, when Charlie Trotter decided not to serve foie gras at his Lincoln Park restaurant (which led to the hilarious public debate with Tru chef Rick Tramonto that in part spurred the writing of Caro’s book), I wondered if Trotter really had a moral epiphany, or whether with California banning foie gras production, he saw a brilliant marketing opportunity and figured if they were going to stop him from serving the stuff, he might as well pretend like it was his idea.

I asked Caro about this at the reading and he said, “Whoever understands the interior workings of Charlie Trotter knows more than I do.  He’s a mysterious guy.  …There were times where he was really sorta supportive (for interviews about the book) and would call me back, and times where he wouldn’t talk to me at all.  …  The curious thing is he said he quit serving (foie gas) in 2002, but in 2001 he released “Charlie Trotter’s Meat and Game” which has fourteen foie gras recipes in it and pictures of him on a foie gras farm with little ducklings.   If you’ve been to all these foie gras farms and you just wrote a book with fourteen recipes, I asked him [Trotter] what did you see that made you change your mind?  And he just said he didn’t want to get into it. … Michael Ginor at Hudson Valley Foie Gras said ‘Look, Charlie Trotter is first and foremost a brilliant marketer and saw this (legislation) coming down the pike.’  Trotter did seem sincere about it [as a moral decision].  … I try not to question whether people are sincere or not, but there’s certainly a question as to whether he is.”

Maybe the best part of the night was when Caro read a passage regarding a conversation with Efrain Cuevas, chef/owner of Clandestino, a local underground supper club (who was in attendance at the reading) about whether killing and eating “cute kitty cats” would be okay if they were the tastiest treat in the world.  The conversation between the two illustrated the slippery slope and moral hazards inherent in the eating of any living being and demonstrated that the line between which animals you nosh on and which ones you don’t is a bit hazy. Ultimately you just can’t get around the fact that we make relative judgments all the time when we choose to eat meat.

One thing that’s not relative is the idea that Caro’s book is an interesting well-researched encapsulation of the foie gras debate.