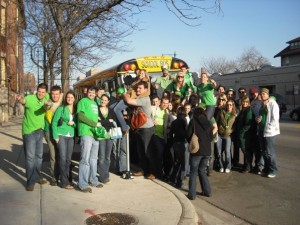 Keegan’s Pub on 106th and Western is surprisingly calm the day before the 31st Annual South Side Irish Parade. Four regulars are interspersed around the U-shaped bar, drinking a pint and talking amongst themselves while the bartender wipes down the counter and flips through the channels to see if there is anything good on TV. It’s almost a little too relaxed considering that in less than twenty-four hours, more than 300,000 will come into Beverly by the busload and the bar will swell up to its 133-person capacity.

“We just wait for the storm to come,” says the bar’s manager Mary McDermott. “The whole week before, it’s the calm before the storm.”

They are fully prepared for Sunday’s onslaught, but with only one bartender and McDermott on duty for Saturday afternoon, they are caught off guard when the storm comes earlier than expected this year. Around 2pm, while McDermott is out running some errands, a school bus screeches to a halt in front of the bar.

“Oh shit, Mary, a pub crawl just pulled up!” the bartender says on the phone to Mary.

“Hurry up and lock the doors!” jokes one of the patrons.

Apparently, a group of University of Michigan alumni chartered a school bus so that they could start getting their drink on a day early. Forty people, dressed in their St. Paddy’s Day green, barge through the door. “I have to pee SO bad,” shouts one girl. Another walks up to the bar with a can of Miller Lite in her hand and asks, “Can I finish this or do I have to throw it out and buy another one?”

The fun bus’ organizer, Sean Mullin, gives an impromptu rundown on the bar, parade and anything else the group might find pertinent about the South Side. “Half of these people aren’t from Chicago,” says Mullin, a Lincoln Park resident. “Seriously, I’ve never come within five miles of this neighborhood.”

This brings up an interesting point; the majority of the customers that will pack the bars along Western Avenue during the parade are not from the neighborhood. “If you shot a cannon in here, you’d hit plenty of people, but not one of them would be a South Sider,” says Beverly resident Mike Collins.

Even though the parade displaces locals from their favorite watering holes, they’re usually getting the last laugh. When the bartender asks another regular if he watches the parade, he responds, “No, I just watch the alley instead.” (Katie Fanuko)