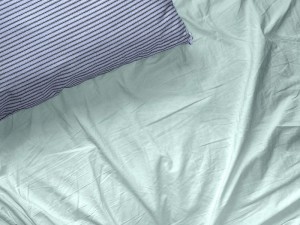 The Art Institute of Chicago has no idea what is about to hit it—a massive pillow fight, to be exact. Unbeknownst to most of the museum’s staff, the Chicago Pillow Fight Club has organized an event in honor of International Pillow Fight Day in front of their building.

Chicago’s Second Annual Pillow Fight could easily be quashed by the Art Institute’s security guards, but not if the event’s participants have anything to say about it.

“I’m not afraid of Gary Coleman security guard,” says Dmitry Starikovski as he points towards the museum’s entrance. “Anytime man.” Yet after a quick intervention with the museum’s staff, the fluffy melee is back on track.

As the crowd gathers in front of the museum and anxiously awaits the signal to start pummeling each other, street performers hype everyone up by shouting “Pillow. Fight. Pillow. Fight.”

Instantaneously, adults take the opportunity to channel their inner 5-year-old, while two little kids work together as a tag team to pound the grown-ups.

Though the average pillow fight is fairly benign, one on this scale can get pretty intense. “There’s feathers and stuff everywhere, you can’t breathe, you leave with stuff in your hair-it’s awesome,” says participant Tegan Jones before the event starts. After about ten minutes, pillows bust at the seams and a blizzard of feathers fall onto the crowd. Though the encounter has morphed into an all-out frenzy, everyone stops what they’re doing to search for someone’s lost pair of glasses. Once they are found, everyone cheers and the fight continues.

The scuffle looks as though it could start spilling onto Michigan Avenue until a cop steps in and reminds everyone to stay up on the sidewalk. Someone shouts, “Officer would you like a pillow?”

A couple of minutes later, the pillow fight is broken up for good while people try to catch their breath—one guy even spits feathers from his mouth. The crowd disperses and everyone starts pulling feathers out of their hair. “Ugh, I need to de-molt,” one girl says to her friend. (Katie Fanuko)