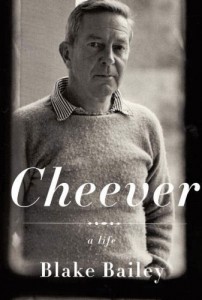 It is somehow continually surprising to discover how many of America’s essential writers were eccentrics, outsiders: in exile, even at home. Herman Melville was forgotten in his lifetime. Richard Wright found refuge from the rage of his youth in existentialism.

Even John Cheever, whom so many readers encountered in the gentile visage emblazoned on the back of his Pulitzer Prize-winning collected stories, was a lonely, equivocal visitor in the suburban world to which his name has since become synonymous.

The 1991 publication of Cheever’s ribald, deeply sad and erotically bisexual journals punched open a new personal dimension to this persona. Now we have an even wider, clearer window into Cheever’s life: this fabulous, enormously enjoyable biography by Blake Bailey, the author of a previous book about another troubled, hard-drinking mythologizer of suburbia, Richard Yates.

Like that volume, “Cheever: A Life” arises on a wealth of scholarship, journal probing, library sleuthing and an authorial voice that is infectiously good-natured and protective of its subject. “Cheever was at once the most reticent and candid of men,” Bailey writes.

The reticence is a familiar story, especially for a writer who comes from New England. But the type of candor Bailey channels from close reading of Cheever’s unexpurgated journals is new and it makes this an intimate, illuminating portrait.

Bailey has managed to make almost every legend about Cheever slightly more complicated in the telling. Publicly the writer alluded to aristocratic heritage, but privately he wrote of his lineage as “Sexual losers, sartorial losers, bums at the bank.”

He wasn’t kicked out of Thayer Academy; he left on his own will, traveling down to New York where Greenwich Village decadents introduced him around to the lights of the day, John Dos Passos, Edmund Wilson and Malcolm Cowley, the editor—aside from Katharine White—who nurtured his talent.

Drawing on the journals, and memoirs of people who knew Cheever, Bailey’s biography vividly contrasts the bold progression of the writer’s style with the inner doubts that tormented him. It is a poignant juxtaposition. Bailey gives each new work a crisply orienting analysis, creating a narrative of progression.

Meanwhile, Cheever’s life moved in lateral, elliptical swaths. As Bailey describes it, affairs left him jagged and depleted, corroded his marriage. The specter of failure and want was never far away. Eventually, the two narratives collide in the 1970s as Cheever’s work begins to fade from view.

Cheever’s late-life literary star—a thing that rises capriciously, often at odds to the time when its light was most needed—might be said to provide this book its own happy ending. Broke, out of print, he wrote one of his finest novels—”Falconer”—won a Pulitzer, became the literary squire he had always wanted to be.

Yet the reality was far more mysterious and complicated. “Cheever: A Life” makes visible this private drama, and does the best thing a writer’s biography can do: it reminds how provisional a writer’s life can feel, it makes us appreciate there is any work at all. (John Freeman)