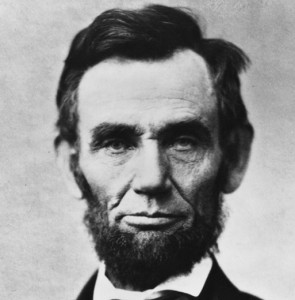 The Chicago History Museum kicks off its yearlong celebration of Abraham Lincoln’s 200th anniversary with “Lincoln Treasures.”  For just one month, the museum is hosting one of only five surviving copies of the Gettysburg Address.  The document is on loan from the Lincoln Presidential Library, and this is the last time it will travel outside of Springfield.  Written on two thin sheets of carefully-preserved, yellowed paper-the 272 word speech that made “four score and seven years ago” an American catchphrase is inscribed in the squat, precise script of Lincoln’s own hand.  To accommodate the swelling numbers of guests interested in seeing the famed speech, the museum has extended its morning hours on Sundays.  However, guests should not linger too close; the document is closely guarded and secured beneath an invisible alarm.  The remainder of the “Lincoln Treasures” exhibit is confined and scant on biographical details, instead serving as secondary adornment to the Gettysburg Address.  However, even the supporting artifacts will make history gurus salivate: several famed busts and molds of the sixteenth president, a first printing of the Declaration of Independence and Lincoln’s deathbed, salvaged from the Peterson House across the street from Ford’s Theater. (Laura Hawbaker)

“Lincoln Treasures” is at the Chicago History Museum through August 16.  The Gettysburg Address is on display until May 3.