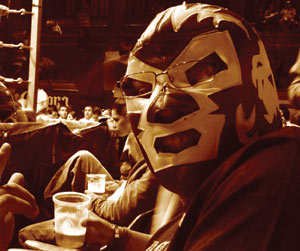 Mention a neighborhood association benefit event and usually the first thing that comes to mind is some stuffy sit-down dinner and silent auction. This is definitely not the case when the Logan Square Neighborhood Association plans a shindig. The “I Love Logan Square” party, complete with salsa lessons and lucha libre sightings, is downright lively.

The party, which is held at Milwaukee Avenue’s Elastic Arts, allows Logan Square residents to mingle with neighbors while raising additional funding for the community. “We wanted to have an event that would introduce new people in the neighborhood to the organization,” says Bridget Murphy, a member of the LSNA who helped organize the event. “The LSNA works very holistically; we organize around affordable housing, education, immigration, keeping good jobs in the neighborhood, you name it.”

Susan Fox, Elastic’s Development and Outreach Specialist, is busy serving drinks at the bar. The LSNA approached Elastic Arts about hosting the event at their gallery and they were more than happy to oblige. Though this is the first “I Love Logan Square” party, Fox would love to see it become an annual fundraiser. “I think that it would be great-there is so much energy at LSNA,” says Fox.

At around 8:30pm the party starts picking up as a group of residents gather to learn how to salsa. Everyone forms a line and learns the basic moves from an instructor who shouts, “Side step 123, 567. Forward 123, 567” from on stage. Salsa music blasts over the loud speakers while dancers keep up with the four-beat measure.

Every hour, a door prize is given away by Raul Islas, one of the event’s auctioneers. Each of the door prizes and auction items are services provided by local businesses or residents. Everything from surf lessons to homemade pies is up for grabs. Islas, who is a member of the LSNA, feels that service-oriented giveaways are a better way of providing for the neighborhood. “This is an example of what people should be doing in these tough economic times-fighting the good fight,” he says before the auction.

The first door prize is a bike tune-up from Smart Bike Parts. “OK, everyone hold your tickets up. The ticket number is…062006.”

“Got it!” shouts Jorge Vasquez, whose handmade luche libra masks will be auctioned off later in the evening.

A few minutes later, Super-LSNA—Logan Square’s official mascot—is introduced in full luche libra garb to address the people. “I saw you earlier today stopping a condo conversion,” says Islas. “Is there anything you would like to say?”