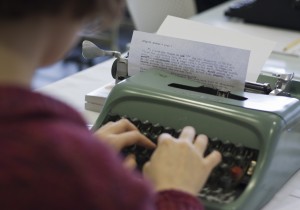 Columbia College’s Hokin Annex echoes with the sounds of manual typewriters furiously clacking away. The school’s library is hosting the first ever “I Wanna Write Like Ray: The Typewriter Olympics” as one of many citywide The Big Read events.

The contest celebrates Ray Bradbury’s “Fahrenheit 451” by allowing students to revive the methods that he used to type the novel’s manuscript and to have their own work compiled into a book. Bradbury’s masterpiece was written on a metered typewriter—which needed to be fed a dime every half hour—in a basement at UCLA.

Jan Chindlund, Columbia College’s Library Director, thinks that this is an interesting way to introduce students to a writing process that was common before the advent of the home computer. “Typing on a typewriter is such a different cognitive experience—you can’t just change your mind,” she says. “Your editing process is completely different.”

This is apparent in watching participants who contemplate each move before committing their words to paper. “It’s a definite challenge,” says Cole Robertson, the Library’s Visual Resources Coordinator. “Most of our students are so young that they are not used to typewriters.”

Many of the typewriters were obtained through donations or rented from Chicago Office Machines. One of the biggest challenges was finding typewriters that were still in working condition—especially since some of them could have been stored away for decades. The machines that are completely out of commission—including a Braille typewriter—are placed on display.

“Hey, why don’t you try typing out your article?” Chindlund asks as she types out some prose of her own.

I take up her offer and choose a tiny black typewriter. As I get settled, I quickly realize that the modern conveniences that I’m accustomed to-delete buttons, spell check, White Out-are nowhere to be found. Some of the letter and symbol keys are out of place and no matter how hard I hit the keys, the ink is barely visible.

“Each one has its own mind,” Chindlund mentions.

Apparently, my typewriter’s main quirk is that English is not its original language. After some tinkering, Robertson figures out that the typewriter was from Poland. “I got them in a Polish neighborhood so that would probably explain it,” he says.

Even students who are able to finish their work still feel that the task was a definite challenge. “Usually when I write, I do things out of order,” says Abi Stokes, a Columbia College poetry student. “It was really interesting to have to make sense of something that just comes out.” (Katie Fanuko)