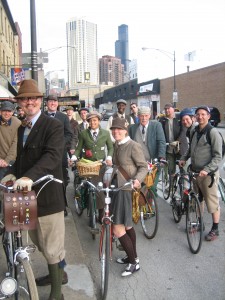 It’s Winston’s Tweed Ride, a tour of former speakeasies that celebrates booze, bicycles and Brits, hosted by the group British Bicycles of Chicago. The jaunt was inspired by January’s Tweed Run in London, where dozens of fixed-gear and single-speed enthusiasts donned dashing duds for a leisurely pedal from Saville Row, famous for its traditional “bespoke” custom clothing.

Actually, tour guide Lee Diamond wears a t-shirt and tights. “I went to nine different thrift stores and couldn’t find any tweed,” he apologizes. “That’s OK-I didn’t even dress up for my wedding.” The ten-mile ride departs at 1pm from Jake’s Pub in Lincoln Park, visiting scores of classic pubs like Glascott’s, Halligan’s, Emmit’s and Lottie’s, plus gangster history sites such as the spot where the St. Valentine’s Day Massacre took place, 2122 North Clark.

Pausing across from the Gold Star bar, 1755 West Division, Diamond announces that the strip used to be a rowdy nightlife district known as Polish Broadway. “This pub has a particularly seedy reputation because above it was a hotel of ill repute,” he says. “It’s also supposed to be haunted.” Outside the nearby Inner Town Pub, a Ukrainian Village dive, Katner complains, “This bar told us not to show up because we’d ruin the atmosphere.” The genteel throng boos loudly.

The outing concludes at the Hideout, where the group hoists pints on the patio as the sun sets and the skyline illuminates. Unable to choose between all the charming ladies in their alpaca coats, flapper caps and aviator goggles, Katner hands out “Most Snappy Lass” prizes to all of them. “Most Dapper Chap” goes to Mexico native Hector Soriano, impeccably attired in flat cap, necktie, knickerbockers and golf shoes. He raises the trophy cup in a shout-out to “all my tweeded Mexican friends.”

Welshman Alan Lloyd, sixtiesish, is vividly dressed in an emerald jacket and britches with red-and-green argyle socks, riding a lemon yellow Raleigh borrowed from his son who owns Blue City Cycles in Bridgeport. “I’m enjoying that I can one-up them because I’m actually British,” he says. “To paraphrase Eddie Izzard, ‘You Americans say “herb” and we say “herb,” ’cause the word has a fucking “h” in it.'” (John Greenfield)