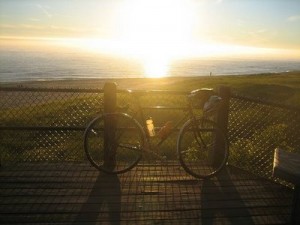 On a hot August morning, I load my bicycle with camping gear and catch Metra up to Kenosha, Wisconsin. As usual I’ve stayed up late packing and haven’t slept much, so I snooze during most of the hour-and-a-half train ride.

Taking a combo of Route 32 and bike paths I ride thirty-five miles to a dock on the south side of Milwaukee for the high-speed ferry to Muskegon, Michigan. The main function of the ferry is a shortcut for drivers who want to avoid Chicago congestion, and the lower deck of the boat is packed with cars, RVs and motorcycles—mine’s the only pedal bike.

The ship moves so fast, what seems like eighty miles per hour, that it kicks up a powerful, chilly breeze that makes it hard to stay outdoors and enjoy the beautiful views. But I stay on the deck, lying behind a front wall, chatting with a middle-aged waitress and a grizzled Harley rider who’s drinking High Life from a plastic bottle, both of them on their backs as well.

Muskegon’s the largest city on the east coast of Lake Michigan, a down-on-its-luck paper-mill town of about 40,000. The deserted downtown’s a little depressing but there’s a great bike path that rings much of five-mile-long Lake Muskegon, populated by a colony of swans. I camp north of town at Pioneer County Park, swarming with kids and adults cruising around on bikes, including an old couple on a side-by-side tandem that seems to be made out of La-Z-Boy recliners. I make a beeline to the Lake Michigan beach, just in time to have a pleasantly existential moment while watching the sundown and sipping Captain Morgan’s.

The next day I stroll the sparsely populated shoreline and read on the sand, although water temperature in the fifties makes it tough to swim. That evening I head back into town to meet up with my bike shop co-worker Doug and his girlfriend Jenny who are, coincidentally, doing a more ambitious two-week trip, pedaling north from Muskegon to the U.P. then south to Green Bay, Wisconsin.

Doug and I stock up on bread, dry sausage and Tasmanian smoked cheddar at The Cheese Lady, 808 Terrace Street, one of a handful of new businesses that are helping to spark a downtown revival. Jenny meets us at Tipsy Toad Tavern, 609 West Western Avenue, where we watch another fine sunset from the rooftop deck and sample “jumpers”—French-fried frogs’ legs.

I bid my friends and head a few miles south in the dark towards P. J. Hoffmaster State Park. In the morning I pedal a few miles to Grand Haven, a tourist town of about 11,000 where the local history museum has a cool exhibit of antique bicycles, including dozens of frame logos. My favorite is the “Lincoln” made by Chicago Cycle Supply Company, featuring Honest Abe standing solemnly in front of his chair. It’s another thirty miles to Holland State Park, just west of the eponymous city, Michigan’s tulip-growing capital. Heading to the beach I have another Zen sunset moment as a female park employee sweeps sand off a long walkway like a Buddhist monk cleaning the temple. 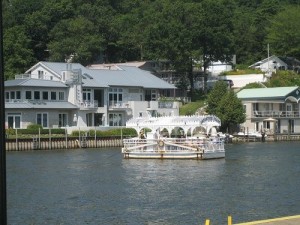 The next day while picnicking by the Kalamazoo River in Saugatuck, I watch the Saugatuck Chain Ferry, an old-fashioned hand-cranked craft, carry passengers across the water. A few more miles down the coast gets me to touristy South Haven, where the large downtown beach is packed with teens and college students in skimpy swimsuits. I stroll down the pier and take a dip in the water which, oddly, is comfortably warm.

After sampling some blueberry-flavored coffee at the Blueberry Store, 535 Phoenix Street, I hit the Thirsty Perch Grille, 272 Broadway Street, for tasty fried fish and Magic Hat beer. Then it’s time to put my bike on a crowded Indian Trails bus back to Chicago.

Pedaling home from Union Station in the moonlight, I deem this multi-modal mission a smashing success. I’m not going to win any Grizzly Adams prizes for it, but combining bicycling with train, boat and bus let me to cover a lot of ground with plenty of time for high-quality loafing.