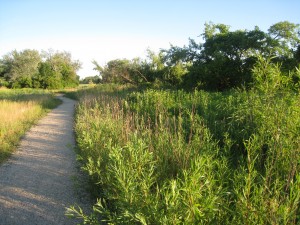 It is 7:40am on a Saturday, and I am smoking a cigarette on Darrow Bridge, waiting for birders to appear. A friend waits with me, and a debate between us is why we are here. Inexplicably, she believes fish to be more interesting than birds. I disagree. In flight and song, birds capture the imagination and lift the spirit. Think “Ode to a Nightingale.” Fish, by contrast, lack all personality. I don’t know of any odes to a fish. Nonetheless, my friend is unconvinced, and so we have come to Wooded Island in the heart of Jackson Park to gain perspective.

During the summer, Wooded Island draws birders and fishers alike. The birders stroll the trails, eyes upon the trees; the fishers troll the lagoons, eyes upon the water. This morning, we hope to join one of the semi-organized bird walks that have been a fixture on Wooded Island for years. Every Wednesday and Saturday morning throughout the year, birders gather on Darrow Bridge and set off together in ornithological fellowship.

Ironically, the first person to join us on the bridge is a fisher. Shabbily dressed and with fishing pole and bucket, he looks like a resourceful hobo. Immediately he catches a small fish. “A crappie,” he tells us, throwing it back. Within minutes he catches another. He calls these little crappies “crumb crushers,” and he is weeding them out in order to get to the big ones he will eat. As before, he throws the fish back, but this time he throws too hard. The fish smacks against the supporting wall of the bridge before falling into the water. It promptly floats to the surface, belly up.

The fisher is apologetic, but I sense an emotional detachment possibly characteristic of all fishers. This is confirmed for me later that morning when we visit Henry’s Sports, Bait and Marine shop at 3130 South Canal. Like the bird walks, Henry’s is a Chicago institution. Here one can spend much money trying to outsmart a fish. The bait menu is extensive. The markup on roaches—baby, medium and large—shocks me, particularly as I get them for free in my apartment. By the front door are dozens of photographs of happy people holding dead fish on hooks, by the gills, or in their arms.  The message of these haunting photos is clear: Fishing is death’s own dark pastime.

Back on Darrow Bridge, a woman with binoculars appears and invites us to bird with her group. Slowly, other people wearing windbreakers, binoculars and sensible shoes arrive. Many of them also wear sensible hats. All are easily over 55. A small bird draws the gathering group’s attention, and we peer through binoculars at a nearby tree. After a description is given (one wing bar, then orange, with a few throat spots), there is discussion about what kind of bird it is. “Sounds like an immature, male Redstart to me,” says one gentleman authoritatively. “I feel better,” someone else says, “now that I know what it is.”

At eight o’clock we move off the bridge and down a trail that runs through the trees lining the lagoon. The birders move slowly, heads up, binoculars to the ready. Birding takes practice, we’re told. The expert birder is deadly with a pair of binoculars, capable of visually nailing a bird with an alacrity that eludes the amateur. The expert birder is unburdened with a field guide; it’s all in the head.

As we walk, I notice that most of the birds we see—crows, robins, geese—are either coldly ignored or mentioned only in passing. “There’s a Baltimore Oriole,” someone says, “to the left of the robin.” With birders, color is prized and rarity valued. Someone spies a White-crowned Sparrow; excitement ensues. The attention a small yellow warbler commands seems all out of proportion to its size. One birder tells me that she hopes to see the elusive cuckoo. 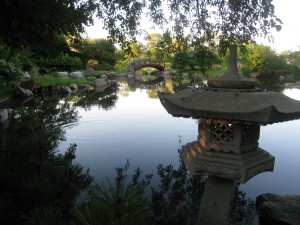 Our path brings us to the Osaka Japanese Garden. Here we encounter birders not from our group. Standing on the steeply arched Moon Bridge, these outsiders suddenly snap binoculars to their eyes with all the quick precision of a smart salute. “What a strange group,” someone mutters behind me. “They’re not going to be here next week, are they?”

As the birders linger in the garden, my friend and I decide to go home. Birds are interesting, but not that interesting. Truth be told, we watched the birders far more than the birds. We briefly speculate on the hidden lives of these mild-mannered (though territorial), sensibly dressed people. “What do you think they do at night?” my friend asks. “Go to bed early,” I reply.

While we have seen no fishers aside from the man on the bridge, it is clear that birding and fishing are hardly equivalent summer pastimes. Our debate remains unsettled. Still, I come away with the idea that together these two activities symbolize a yin/yang balance at the very heart of the seasons: Enjoy the flights of summer now, for tomorrow’s winter may have to eat you.

Fish more interesting than birds? Please. There’s a reason why our national symbol is a Bald Eagle – and not a Sockeye Salmon. Fish are boring. Keep up the good fight Mr. Roberts!