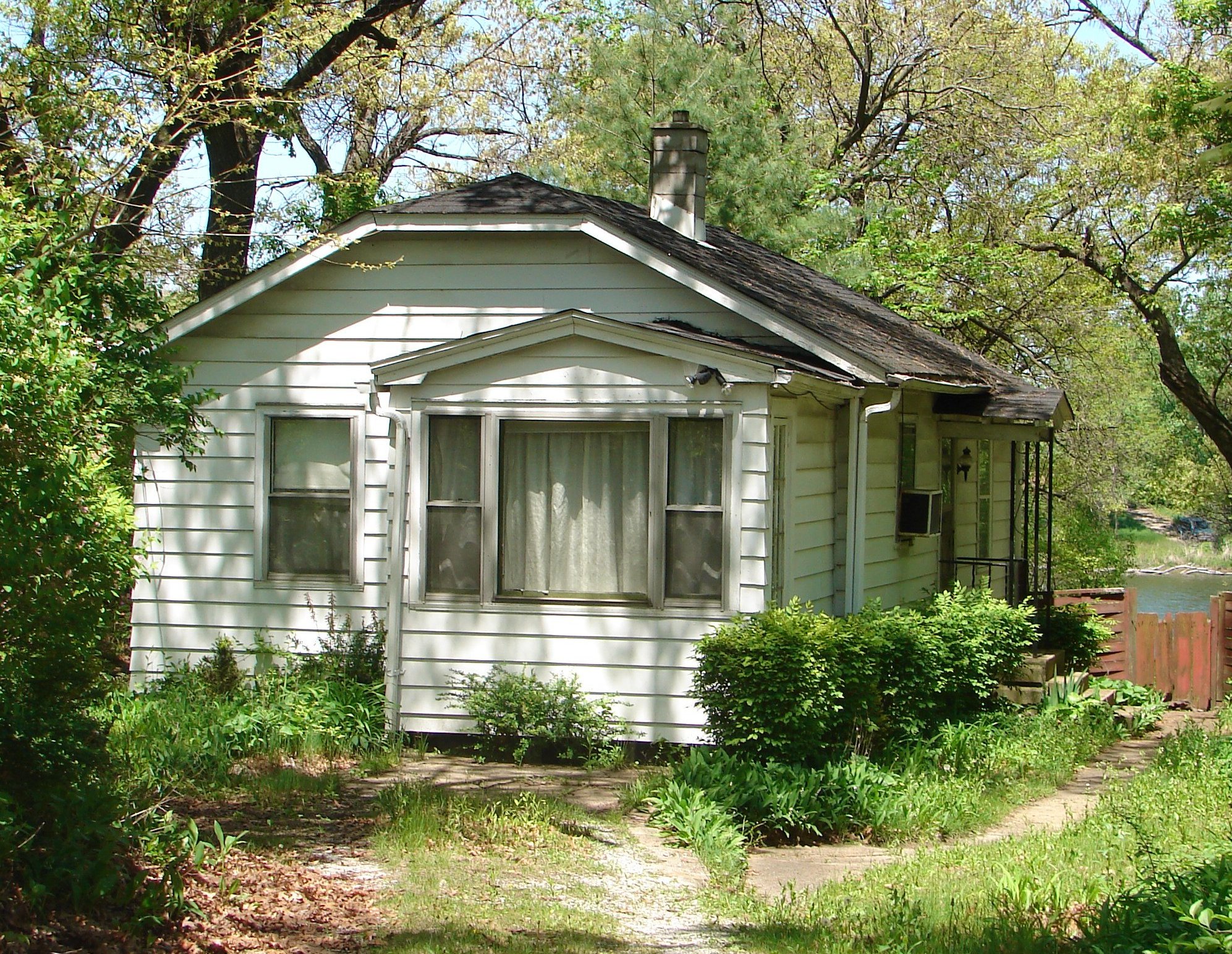 Nelson Algren bought his beach cottage in Miller, Indiana in 1950, partially from the proceeds from the film rights to “The Man with a Golden Arm.” I was born on Juniper Street, across the Calumet Lagoon from his cottage a few years after Algren had left. However, tales of the man whom many consider to be Chicago’s greatest writer have echoed through my family gatherings ever since.

In a way, a lot has changed in Miller since Algren and Simone de Beauvoir drank, swam, hiked, made love, wrote and enjoyed the dunes area just east of Gary only forty-five minutes from downtown Chicago. Yet a lot has stayed the same, and it is not hard for Chicagoans to spend a summer afternoon retracing the steps of Algren in Miller.

For starters, the small white beach house is still there at 6223 Forrest Avenue, largely unchanged. He brought his  friends like photographer Art Shay, and carried on a torrid affair with de Beauvoir there. The affair and de Beauvoir also had its effect on the small Indiana town. My late uncle, William Kisslauskiss, used to talk about de Beauvoir whenever Algren’s name was mentioned. “She used to sunbathe nude in the yard of the cottage. I remember the mailman telling me about it, he was shocked,” Kisslauskiss said with a slight chuckle. “We might have nice beaches but it isn’t the French Riviera.”

Apparently de Beauvoir wasn’t the only female liaison Algren brought to the cottage.

“Grandma and Auntie used to see the girls coming in and out on the weekends,” Ann (Kisslauskiss) Witter, my mom, said. “We were young and they wanted to protect us kids so they referred to them as ‘his housekeepers.’ They would say, ‘The writer is back for the weekend. He has another new housekeeper. ‘”

While the house has stayed the same, so too have many of the natural and architectural landmarks around Algren’s cottage. Algren loved to take morning walks and moonlight swims. About a hundred yards northeast of his former house is not only the Calumet Lagoon but the Marquette Park Pavilion. Built in 1923, it was designed by Prairie School architect George Maher. The sandy brick structure and patio seem to stretch out over the lagoon and into the dunes, combining turreted towers, Corinthian columns, Art Deco globe lights, French Colonial balconies and Prairie patios. About a hundred yards to the north is a plaque dedicated to Octave Chanute. It was in these dunes, from 1896-1897, that Chanute (who also designed the Chicago Stock Yards) invented and tested the first double-decker hang glider. In 1902 the Wright Brothers worked with Chanute, later incorporating his bi-wing glider design into the first airplane. 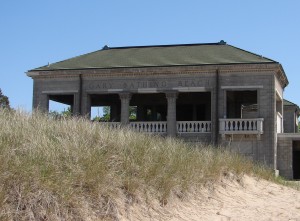 If you walk over the dunes, across a small road, and onto the beach you will see the Gary Aquatorium. A giant gray structure with Roman pillars two stories high, a courtyard and wondrous lake views, it was built in 1920. After years of deterioration it is now being restored, and is the site of weddings, concerts and civic events.

If Algren walked from his cottage to the west, it was usually on his way to Pignotti’s Store, at 720 North Lake Street, to buy a quart of Schlitz. A shack that sold everything from beer to bandages, it is now Ono’s Pizza. In a story that is now part of Chicago literary annuls, Algren was crossing the lagoon on his way to Pignotti’s one winter afternoon when he fell through the ice.

“Grandma and I were in her bedroom near the lagoon and we heard him screaming for help,” Witter says. “We couldn’t do anything but luckily there were some construction workers nearby who pulled him out.”

Other places Algren may have visited include the original Flamingo Pizza. Opened in 1941 in downtown Gary, the “franchise,” with the original recipe, still exists as a laidback, beach-bar/restaurant at 8341 Locust Avenue. Algren may have bought some bread at the “original” Miller Bakery (circa 1941), at 555 South Lake Street. Today the Miller Bakery is an upscale restaurant serving foie gras and fish and seafood dishes, such as rock shrimp with andouille-sausage risotto, Asian crab cakes and cornbread custard with cilantro pesto.

Then there is Lake Michigan and the Dunes. Thanks to Senator Paul Douglas and later President Carter, most of the lakefront, from Lake Street (Miller) Beach east to Michigan City, is either part of the Dunes National Lakeshore or the Indiana Dunes State Park. A walk through the dunes will reveal larger, cleaner beaches than Chicago and some of the most unique flora and fauna in the world. Miller has Miller Beach on Lake Street (now filled with jet skis), West Beach on Lake Shore Drive and The West Beach in the National Lakeshore. All are public, but it costs about ten dollars for parking.

Yet our family’s greatest memories of Algren did not take place during the summer. My great uncle Steven Parfenoff was a Russian-born sculptor who lived a few houses away on Forrest Avenue, and the only “townie” that Algren hung out with.

“During the holidays he didn’t send ‘uncle’ a Christmas Card,” Witter says. “Instead, he would shove a bottle of vodka in his mailbox, honk his horn, wave and drive away.”

can you buy this as a poster ?

I’m Chicago born and raised (South Side), taught a love for literature by a priest at “Catlick” school, Algren was a legend. Been living in Miller Beach for 35 years, heard stories from old-timers about Algren (besides women, he loved poker games and whiskey with the locals). If you haven’t done so, the old Goldblatt’s on Ashland/Chicago has an Art Shay exhibit (b/w photos) in the lobby (hope it’s still there). A must see for Algren fans.

any way i could buy a ciopy of this photo ?

The pictures are gone, but was interested in seeing Miller, any good?

Is the house at 6223 Forest Ave in Miller currently occupied?
Who owns it? Is it available for sale or rent?

i asked the folks who take out the garbage if the house is for sale and they said no. does anyone know why?

Michelle, I wrote the article about Algren and have the photo. I am flattered by your interest. Maybe we can work something out for you to get a copy…

the address is actually 6228 Forrest Ave. The mailbox was also Algren’s original one, it had to be big like that for him to mail his manuscripts and recieve packages. The house is very beautiful inside and out. only one owner has had the house since Algren, and that was my grandparents. It needs some repairs, but they are thinking of selling it soon.

Katie; Pleeeez email me. I want to know more about the house: [email protected]

Hello, I am also interested in this house and would like to see pictures of it inside and out if possible. Thank you!

I grew up at 6009 Forest Avenue and, born in 1942, I was old enough to know Nelson Algren. He was a dinner guest at our house. All he wanted to talk about was how the lawyers cheated him out of money from the movie of The Man with the Golden Arm. I got the impression that he was living on our street because he was broke. He wouldn’t subscribe to the newspaper that I delivered; said he couldn’t afford it. It was a schoolmate of mine who pulled Nelson out of the lagoon that winter. Details. The boulder with… Read more »

Hi There Katie; It’s been two years since your comment here, and I am still wondering if your grandparents are still thinking about selling the house. Thank-You

Sorry the house is not for sale, they have changed their mind for the time being. I’m sure they will post something when they finally decide to sell it. They have requested their privacy to be respected please. Thank you.

We just screened ALGREN, the Nelson Algren documentary in Miller Beach for the newly formed Nelson Algren Society of Miller Beach. Go check them out at https://www.facebook.com/nelsonalgrensocietyofmillerbeach. They have more events planned for Miller Beeach!

Pignotti’s grocery store was at 704 North Lake Street, not 720. Look in any Gary city directory via Ancestry.com from the 1950s. Joe Pignotti’s real name was Giacinto Pignotti. When Joe retired, he and Antionette had the store torn down, so they could build a nice house on the back end of the property. The present Ono’s Pizza is in the next-door shack, one lot to the north of Joe’s old location. Also, Algren was friends with many “townies,” not only Mr Parfenoff, who lived almost at the opposite end of Forest Avenue, not a few houses away. My father… Read more »