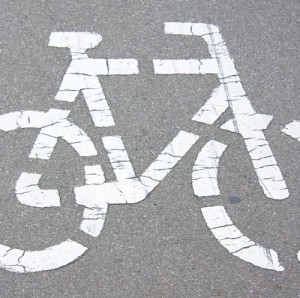 A woman places a tin foil “bike helmet” on her Schnauzer and gently secures him into the doggie carrier on the back of her bike. As she does this, a crowd of bicyclists quickly gathers in Columbus Park at 500 South Central. By 1pm, roughly sixty people are waiting patiently to take a seventeen-mile bike ride zigzagging past the architectural gems in Chicago’s Austin neighborhood.

“We’ll give stragglers a little more time,” says the tour’s organizer, Lee Diamond, while he gathers everyone’s attention. As he goes over some bike-safety basics, he is interrupted by a loud, balloon-like pop. A tire on the bike next to him quickly deflates. Suddenly, fellow bikers spring into action producing inner tubes and an air pump. Another tour organizer Cynthia Bell and a couple of others rush over to change the tire. “I’ve got a wrench!” someone yells.

Diamond continues by discussing the tour’s itinerary as well as the history of the area. Aside from showcasing the neighborhood’s rich architectural legacy, one of the main reasons that Diamond is hosting a bike tour in Austin is to raise bike awareness within the community. Out of roughly seventy-seven neighborhoods in Chicago, Austin is one of the largest in size and population, yet it is also one of the least funded. “It’s very much about trying to bring positive things to areas that have some of the most beautiful architecture in the city,” he says.

Diamond, who co-owns Big Shoulders Realty, is an avid cyclist who has organized bike tours in thirteen Chicago neighborhoods. These tours caught the attention of Bell, who works with the Active Transportation Alliance. She approached Diamond with the idea of raising biking awareness in neighborhoods on the city’s South and West Sides. The Austin tour and an upcoming Hyde Park tour are the result of this collaboration. “I want to promote bike culture on the South and West Side to get people to be healthier and interact,” Bell says.

After a quick ride through Columbus Park, the group descends onto Austin Boulevard. After a few blocks, the sight of everyone barreling down the street attracts attention. Little kids run along the sidewalk and wave. “If I had my bike, I’d be right there with you,” one woman shouts as we ride past her house. On Roosevelt, drivers honk and wave while Diamond shouts “Happy Sunday!” to them.

After four hours, the group stops at a Frank Lloyd Wright house and the home’s owner meets us outside. She listens intently as Diamond talks about the history behind her home and quietly thanks us for stopping by. One of the neighborhood kids who have started riding with us finishes out the tour. Diamond shakes his hand and thanks him for joining us. Diamond plans to eventually tour every neighborhood in Chicago. “We do intend to get to them all,” he says. “It’s a multi-year process.” (Katie Fanuko)