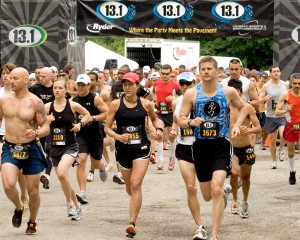 Distance runners are a masochistic lot. Who in his or her right mind willfully rises at 5am on a Sunday morning in order to go out and run a baker’s dozen miles with a few thousand others? But even the most intrepid ultra-marathonner’s tolerance for pain has limits, and being greeted at such an early hour by a cheesy announcer cheerfully hyping the presence of the Blues Brothers at the starting line is very very close to any runner’s threshold.

Not surprisingly, this race, the inaugural 13.1 Chicago Marathon, is being produced by out-of-towners who’ve apparently yet to succumb to Jake and Elwood overexposure. The Chicago half-marathon universe is going through a big shakeup this year, with a doubling of the number of major races from two to four, signaled by the arrival of two national companies who make a  business out of producing long-distance races in various markets around the country. The Chicago Distance Classic, run each August, was sold and this year becomes the Rock ‘N’ Roll Chicago Half Marathon. And late last summer, the owners of the 13.1 series, Dallas-based US Road Sports and Entertainment Group, acquired the venerable Chicago Half Marathon just weeks before its running in September.

Thankfully, the Blues Brothers are actually a relatively benign offense; in nearly every other way, the 13.1 raises the bar for the rest of the city’s races. And ultimately, that’s all that matters to racers: hell, let Sanjaya and Patti Blagojevich sing a duet with ukuleles for all we care; just make sure we get our water when we need it. And on virtually every front that matters to runners, 13.1 delivered. From the wave start, which spreads runners out according to pace in order to prevent frustrating clustering, to the consistent water/Gatorade stations every mile, to the post-race survey of runner satisfaction (a first for me), 13.1 sent a clear message of professionalism; only the interminable wait for gear pickup—at least a half hour—was a letdown.

Above all, these newcomers mapped out a beautiful course likely to show even natives a thing or two new about their city; it started and finished at the glorious South Shore Cultural Center and made its way through Jackson Park, through the Wooded Island and along the South Lakefront. In some ways, the race benefited from its relatively small scale (4,000 or so runners, versus the 15,000 or more they’ll encounter in September), since some of those paths in the park could not accommodate too many more runners at once.

And at the finish line, a slice of Lou Malnati’s pizza. Some cheese tastes pretty good, even to an exhausted masochist. (Brian Hieggelke)