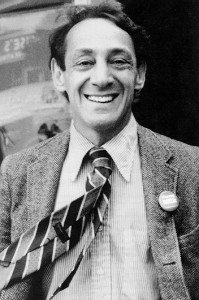 Two letters hand-written by Harvey Milk will be sold July 28 in Leslie Hindman Auctioneers’ Fine Books and Manuscripts auction. The letters, written in the 1950s, highlight issues still key today-gay marriage and military service. Milk wrote the letters to Patrick Mormon, with whom he became friends while in the Navy. He was quiet about his homosexuality and political involvement at the time, but wrote honestly and frankly to Mormon. “These are the earliest [letters] I could find, and they are incredibly revealing,” says Mary Williams of the Books and Manuscripts Department at Hindman. “They aren’t in any collection anywhere.” The first regards Milk’s discharge from the Navy after serving during the Korean War. Rumors later circulated that he was dishonorably discharged due to reports of homosexuality. “Don’t say or do anything. I’ve been turned in,” Milk wrote. In the second letter, he discusses hopes to marry an unnamed man (possibly Joe Campbell) while on leave. “If things work out as I want I may be a happily married man by the end of this year. ‘Gay marriage,’ that is,” he said. The letters were bequeathed by Patrick Mormon to the current owner, who requested anonymity, Williams says. The estimated price is $1,000 to $2,000 but they are expected to sell for much more at the auction. The auction will also be online, and the letters will be on display July 26 and 27 at the Hindman facility, 1338 West Lake.