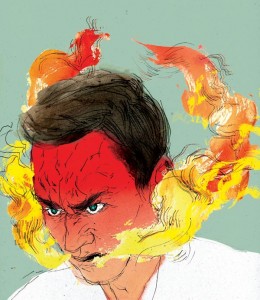 I’ll be on time for my appointment, if I can just get on this bus. Problem is, my bus stop is at Belmont and Lake Shore, the last stop before several routes go express. The express bus is a great timesaver, but it can be its own circle of hell.

In this scenario, which plays out on most express buses that run along Michigan Avenue or LaSalle at all times of the day (and plenty of other routes during rush hour), a bus will barrel up to the stop. As I and twenty other people mob the door, I don’t see anyone standing in the bus yet, so I should be able to get on.

We all slowly trickle on, but those of us at the end of the boarding line start getting smashed in up front. It looks like I’ll be playing “identify the perfume/cologne/deodorant (or lack thereof)” for most of my ride. When I look down the aisle, I see plenty of room in the back of the bus. The standers have decided they don’t want to move past the back door. Heaven forbid that anyone actually goes up the two steps to the back of the bus and stands in the rear.

Even though the driver yells for people to move back and also plays the recorded voice reminding everyone, “As a courtesy to boarding customers, please move to the rear of the bus,” nothing seems to goad standers into moving back so that more people can actually board the bus. Plenty of room in the back, but up front, we’re all jockeying for position and trying not to elbow the driver or obstruct the view in her mirrors while she drives down Lake Shore.

This is not rocket science, people. You’ve all been riding the bus long enough to know by now that at rush hour, these babies get packed. When the bus is full and empty space is next to you, move down and fill it in. Quickly, so that everyone can get on, and the bus can get moving again. I understand that you might get off at the next stop and don’t want to shove through a crowd, but the next person doesn’t know that and can’t get past you. Don’t make me squirm around you either, because I will shove your backpack aside and accidentally step on your toes. I don’t need your glares. I need some room. And five other people desperately want to get on this bus.