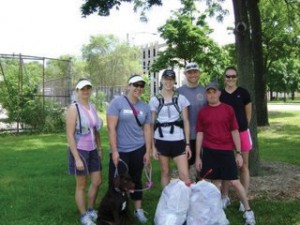 On a mildly warm, sunny day on Chicago’s South Side, a group of six avid runners and their mascot dog, Sadie-a chocolate lab and spaniel mix-gather together at the corner of 59th and Cottage Grove. The group’s organizer, Paige Troelstrup, pulls out trash bags and latex gloves, giving one of each to everyone.

The Chicago Trash Runners, as the group is called, was organized by Troelstrup when Jeremy Litchfield of Atayne, an environmentally conscious athletic-apparel company based in Virginia, suggested she start a trash running group in Chicago. This gathering at Washington Park is the second meet-up for the group; the first was last month at Belmont Harbor.

Once the gloves are on and trash bags opened, the six set out to pick up garbage. Some go out on their own while others team up with one or two people. “Let me know if you find anything interesting,” Troelstrup calls out.

Last month’s Belmont Harbor adventure led to the discovery of a bottle with a note inside, a cardboard box of dead fish and Tupperware bins.

Despite the name, there actually isn’t much running. “It’s difficult to run when there’s trash every two feet,” one member says.

Many of the group’s members also belong to the Chicago Ultrarunners, Chicago Tri Club and other athletic groups, however Troelstrup says the running is kept minimal and it’s not required that members be avid runners. “We have members who are not runners but they join because they just want to get out and move around,” she says.

While some races have participants who pick up trash behind the runners, this is the first non-race-based group of its kind as far as Troelstrup knows. Litchfield is also looking to expand the group to Seattle, LA, DC, Maine and Vermont, with each area having their own organizer and meeting up once a month.

After an hour of picking up trash, the Trash Runners regroup, sharing stories of what they’ve found. Socks, a shoe, a shirt, condoms and a syringe-with the cap on-top the list.

The group here is new, so there are still a few kinks to work out. After this run, Troelstrup takes note of a few improvements. She decides that each run should have a set time-probably about an hour-and that there should also be an official meet-up spot for when everyone is done and a rule to hold on to your trash bags to help keep track of how many have been filled.

“There are little things to improve on that will make it run a little smoother every time,” Troelstrup says. “It’s all a learning experience.” (Beth Wang)