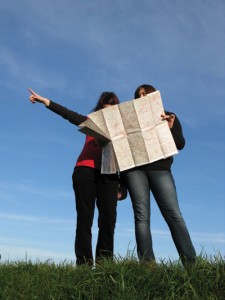 A laptop, a Europe travel book and a few print-out maps sit on the table at Mercury Café on a Thursday night as Chris Kraj and Jen Petruska plan their two-week backpacking trip for August, beginning in Spain then going to southern France, Switzerland and Italy.

This is actually the first time the two have ever seen each other in person. They met through the online forum for the Chicago Adventure Travel Club, the local chapter of the Global Expeditions Club founded by Kevin Foley and Jeff Kelly. The first chapter of Global Expeditions formed a year ago in Boston and has since grown to forty chapters across North America.

Because the leader of the Chicago club is currently traveling and was not involved with planning the trip, Global Expeditions is not sponsoring Kraj and Petruska’s backpacking venture, but Kelly said he still wanted to let them use the meet-up forum to organize something on a personal basis.

“It’s hard to find people to travel with when all your friends are married and have kids,” Petruska says.

Kelly says one of the things he likes most about Global Expeditions is that, unlike many other travel clubs, it’s free to join. “In this economy, that’s a proven success,” he says. For most chapters the goal is to meet about once a month and just talk about travel or plan a trip.

Each chapter can choose its own destination, or members can meet up and go on trips with other chapters. Or even, in Kraj and Petruska’s case, plan a personal trip with other members. The Chicago chapter is led by Christine Beaderstadt and meets once a month at Matilda’s Bar on Sheffield.

Kelly says members can be old or young, new or seasoned travelers and many times the average age of a trip depends on the destination. One of the most recent trips took the group to Machu Picchu and the Amazon and they’re currently planning a “Best of California on a Budget” tour that will take members to Yosemite, Napa, Tahoe and San Francisco.

In addition to plans for starting chapters in Europe, Kelly and Foley want to expand their Web site, globalexpeditionsclub.com, so people can use it as a forum rather than just going through the meet-up site.

“We didn’t expect this to expand so quickly,” Kelly says. “The enthusiasm of our leaders is very encouraging…[on the Web site] they can have a blog or a discussion and people can also get in touch with other chapters if they want to go to that destination.” (Beth Wang)