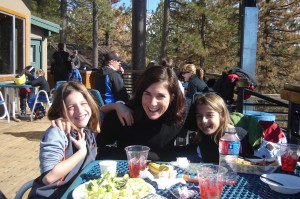 This past December, women’s rights advocates Anne Ream and Randi Shafton introduced their new Web site to the blogosphere—Girl 360, a digital “safe space” for tween girls everywhere. Filled with advice columns, stories about successful women and empowering T-shirt logos, the site is meant to make girls feel good about themselves and to give them “hope,” says Ream, and “life lessons they can apply,” says Shafton. Ream asserts that advice and encouragement are particularly important for tweens, who are at “a vulnerable point in their lives,” a time when, as she puts it, “girls are getting a sense of who they are.” During this period, Ream and Shafton believe it is especially important that girls have positive female role models. Ream explains, “Every great woman started out as a great girl, one who often discovered her own ‘superpowers’ after encountering other super-cool female role models. Our mission at Girl 360 is to make encounters like this possible by bringing the stories of history’s and today’s most amazing women to the attention of a new generation of tween girls.” The goal of Girl 360, Shafton explains, is to provide a “shared dialogue” which “makes a girl that much stronger and that much smarter.”  According to 10-year-old Sara Alavi, that is precisely what the site does for her. “I am very inspired by the women on the site, so, if I need inspiration to do something that isn’t easy, I go to Girl 360.”

Shafton and Ream say that their key strategy is storytelling. Shafton explains that “children are fascinated with stories” and that stories allow girls to “connect” with great women and to “feel and touch these women in a different way than an American Girl doll.” Regarding role models, Ream stresses, “catching a glimmer of ourselves in their stories can be the first step in finding our own power.”  Ream emphasizes that there is something “universal” about many life stories and says that driving this home is an important part of what Girl 360 does. “The moment you can identify what’s timeless about a story is the moment that you can tell a young girl a story that will spark their curiosity and their interest,” argues Ream. Shafton believes that “stories can be helpful for anybody at any point in their lives,” and so she thinks that, if you tell girls inspiring stories when they are young, you can have a “lasting impact” by giving them “an optimistic sense that anything is possible” and stories that will continue to inspire them throughout their lives.

By telling girls about women who “break barriers,” “talk back” and “make the world a better place,” Ream says that Girl 360 introduces tweens to “really amazing young women who don’t fit the model of the women of Vogue and Cosmo.”  Girl 360, Ream declares, is “putting forth a different set of values” than the mass media; instead of measuring a woman’s worth by what she wears or what she looks like, they value her for her “character,” “tenacity” and “discipline.” Ream elaborates, “If there is a single quality that seems to characterize the girls we have talked to and women we are featuring on Girl360.net, it is positivity: the belief that they can do it, they should do it, and whether the world wants them to do it or not is besides the point.”

But both Shafton and Ream are careful not to treat these women like goddesses, because they want girls to be able to relate to their heroes, and not simply to worship them. The trouble with role models, Ream says, is that they very often “become iconographic and leave the impression that they came out of the gate rocking the world.” Ream and Shafton hope to make girls’ role models accessible by showing not only their moments of greatness, but also their moments of weakness, since they believe it is important for girls to know that everyone feels afraid and makes mistakes, even people that are “great.” Ream and Shafton also believe it is important to tell girls something about their role models’ childhoods since they want girls to understand that, as Ream puts it, “all great women were girls once.” According to Shafton, the stories Girl 360 tells about women are “not just focused on achievements but also on the adversities these women have overcome,” and are often “less about accomplishments and more about the human journey.”

Whatever Girl 360 is doing seems to be working, because many Girl 360 users report that they feel empowered after visiting the site. Ten-year-old Wynn Abrahamson relates that, when she hears about the girlhood of women she admires, she thinks to herself, “That could mean that I could become… like them!” Ten-year-old Zoey Lieberman says that she likes the site “because it teaches that you can do anything.” Zoey’s twin sister Ellie says it taught her something similar, that “if you think you can do it, you can.” Ellie explains, “What I learned from the site is… Everyone is able to do something. Even if it’s little, it’ll help. You should just be happy the way you are.”