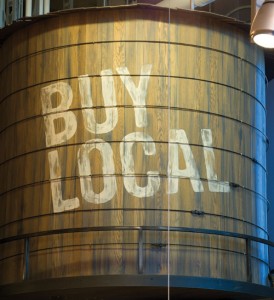 The new Whole Foods store in Lincoln Park features this large display, as well as signage throughout, that suggests customers "buy local." Whole Foods is based in Austin, Texas, with more than 270 stores.

Newcity has a very clear bias regarding this week’s cover story, for we are the last of Chicago’s independent cultural weeklies. The Reader is now part of the second-largest chain of alternative weeklies, based in Tampa, Florida. Time Out Chicago, though funded in part by a local investor, is affiliated to a global chain operating under the Time Out banner in London. The Onion is now a chain of newspapers and other media properties with dual headquarters in New York and Chicago.

We embrace the local cause then with a healthy helping of self-serving intention, leavened by the understanding that the movement is, in some regards, a micro-version of nationalism. Local businesses like Newcity do not deserve to thrive solely because of our ownership structure; we must earn our place in the competitive economy. We’d like to think we hold our own in a fair fight. But the playing field is rarely level, alas.

We’ve seen the fallout, though, up close—that much discussed of-the-$100-spent-with-locally-owned-businesses-$45-stays-local effect. When the Reader was sold to Creative Loafing in 2007, the new owners quickly made two changes. One, they closed the art department, laid off its employees and brought all the design and production work to Atlanta. The second abrupt change was to move their printing, which for all newspapers is usually the largest expense after labor, away from their locally owned printer, who’d served them for thirty years, and sent it out to Milwaukee.

Like everyone else, Newcity’s “local” consciousness has been rising these last few years. I’m happy to report that, between our staff and freelancers—virtually all local—and our printer, the very same operation abandoned by the Reader, nearly all of our purchasing dollars stay in the Chicago economy. There are small exceptions, to be sure, like our phone company and Internet hosts, but we consciously seek the local option whenever we can.

And so, we ask Chicago businesses that believe in the Local First movement to do the same. To not only extol the virtues of their customers spending their dollars locally, but to do the same with theirs, not only as consumers, but also as businesses. For us, for example, it’s heartbreaking to see businesses that trade on the Local First concept with their customers advertising in chain publications and ignoring the increasingly few local media options available to them.

If businesses don’t practice what they preach, they’ll have a hard time finding believers. (Brian Hieggelke)

(Here’s an ironic afterthought. Our story this week on “local washing” is not local, but rather a story made available to us through the Association of Alternative Newsweeklies, and one that ran in several markets. We added our own spin, of course, but thought you should know.)