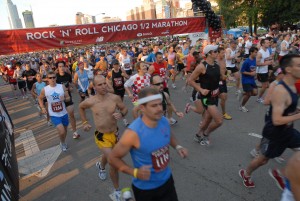 Lined up among 14,000 fellow runners at six-thirty on a Sunday morning, I’m wondering how this Rock ‘N’ Roll Chicago Half Marathon will be “rock ‘n’ roll.” Then the announcer points out a charity runner who’s running for NORML. “Ah, I think, the potheads are here. It is rock ‘n’ roll.”

Turns out the charity is not the National Organization for the Reform of Marijuana Laws, but Normal in Schools, a nonprofit dedicated to raising awareness about eating disorders and addictions, that communicates its message through producing a musical. And no, I’m not high right now.

What is “rock ‘n’ roll” these days anyway? When I heard that the long-running Chicago Distance Classic, a serious, conservative-sounding name for a race if there ever was, had been sold to a national operator of races under the Rock ‘N’ Roll rubric (the company, Competitor Group, also operates participant-athletics magazines and recently acquired and renamed Chicago’s Windy City Sports), I naturally thought they’d be turning it into a big party. I just hoped they also kept up the racing quality of what had been my favorite local half-marathon.

Turns out that they improved it. What’s really impressive, however, is not how they’ve synthesized rock ‘n’ roll’s origninal rebellious spirit, but how much they’ve borrowed from the sponsorship mastery of the modern arena rock tour. From the expo held at McCormick Place the Friday and Saturday prior, to the after-race “midway” of vendors in Grant Park, this was the best assortment of sponsors I’d encountered. I scored as many free samples as I could carry, and didn’t even bother to get after the free Chinese food from PF Chang’s since the line was so long. 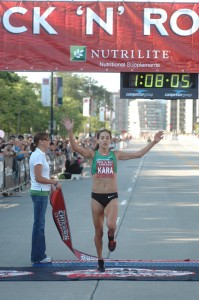 But what runners really care about in a distance race is in the execution, and the Rock ‘N’ Rollers nailed it. And did so in the details, from the pre-prepped gear-check bag (I didn’t check since I live nearby, but those I asked said the line, often an Achille’s heel, wasn’t bad), to the ample supply of bathrooms (critical before a race, trust me), to the staggered “corral” start by estimated pace, to the well-managed water and Cytomax (or as one well-intentioned group of young volunteers offered, “Gatorade”) stations, to the GU energy gel station, to the cold-water sponge stations, to the beautiful trail through the city and along the lakefront (only one spot seemed poorly mapped, where the racers got too clustered together far too late in the race), to the organized and efficient post-race gauntlet of beverages, bananas and other snacks, finisher’s medals, photos and cooling showers (nice touch). Even the bands playing along the course seemed a bit less cheesy than expected. For their inaugural outing in Chicago, the Rock ‘N’ Roll folks took everything to a new level, including the highly publicized participation of American Olympic hopeful and distance-running star Kara Goucher, who won the race.

One of the sponsors, MGD 64, was operating a “beer garden” and all runners got two cold ones on the house (really nice touch), which made listening to the bands on the big stage in Grant Park actually feel like a party. Nearby, a guy asked his companion the time. “9:30am,” he responded. “A new personal record, by twenty minutes!” he exclaimed. Over by the kegs, the sign said, “Last call, 11:30am.” Now that’s rock ‘n’ roll. (Brian Hieggelke)