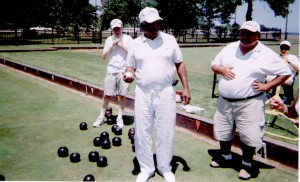 Hidden near the parking lot of the Museum of Science and Industry, people meet in a green near a little brick building. Seen from afar, their rituals seem somewhat strange. They dress in all white, use odd hand gestures, and throw balls on their lawn. I have decided to meet these people. A Scotsman dressed in white shakes my hand, and smiles, “I’ve got something for you.” He introduces himself as John Clark, reaches into his bag and takes out a tiny ball, which he twirls between his fingers. Clark grins and exclaims in brogue, “These are the best bowling balls out there. There’s no excuse for not playing well when you have these.” I nod. I take the ball and throw it across the grass. The ball bounces and goes only a few feet. “Try again,” he tells me. I throw the ball harder, and it goes further, but in the wrong direction. “It’s not an easy game,” Clark shrugs.

Like many Scots, Clark loves land bowling, and considers the sport to be an important part of his heritage. Clark has been playing the game for years, both in Scotland and here in Chicago, at the Lakeside Lawn Bowling Club.

Every Tuesday, Saturday and Sunday, weather permitting, the Lakeside Lawn Bowling Club invites its members to bowl, and gives free lessons to beginners. Because many people have not heard of lawn bowling or seen anything like it before, the club makes an extra effort to educate people about the sport.

Lawn bowling has a deceptive name, because it barely resembles what we think of as bowling. Instead of bowling indoors on a bowling alley, players bowl outside on a lawn surrounded by a moat that players call a “gutter.” Unlike ordinary bowlers, lawn bowlers don’t throw fast and hard.  They throw slowly and carefully, so that their balls glide across the grass.  Marked by precision and elegance, this is not the sport of the Jeff Lebowskis of the world.

The rules of the game are totally different.  Bowlers try to get their balls closest to the “jack,” which is a white ball thrown at the beginning of each round. That’s pretty simple in theory, but there’s more than one catch: (1) Lawn bowlers use difficult-to-aim, lopsided balls that curve and move differently depending on the terrain. These tiny biased balls are weighted to one side and do not have holes, and they are very, very hard to throw straight.  (2) To throw well, players must position themselves differently than in most sports, which means lawn bowling requires some adjusting even for experienced athletes. (3) Bowlers can hit other players’ balls and move them, and can also hit and move the jack, which means that the winning team can change from moment to moment. When played well, lawn bowling turns into an athletic chess game, where players must have both an offensive and defensive strategy, and must balance the need to get close to the jack with the need to protect their positions. 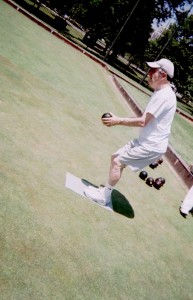 An ancient sport popular throughout the world, lawn bowling has a long and illustrious history that many Americans do not know about. The lawn-bowling tradition has survived more than a thousand years, and lawn bowlers of the past include such notables as King James I, Henry VIII, George Washington, Thomas Paine and Walt Disney. The Egyptians invented the sport using skulls as balls, and the Romans spread the game across their empire, where various versions developed under different names, such as the Italian “bocce” and the French “pétanque.” Quite popular in the British Commonwealth, the sport played an important role in British history, when Sir Francis Drake refused to stop lawn bowling when the Spanish Armada was coming and said, “There is plenty of time to win the game and thrash the Spaniards, too.” The most common form of “lawn bowling” comes from Scotland, which preserved and developed the sport during the hundreds of years when their British neighbors prohibited commoners from playing.

Americans have had a complicated relationship with lawn bowling, since we have embraced and disdained the sport at different points in our history. A favorite among British and Scottish nobles long ago, lawn bowling became a staple of high-class living, and many brought the sport to America. Early Americans made bowling greens throughout the country, including colonial estates and towns like Mount Vernon and Jamestown. Some colonists even named their cities “Bowling Green” to pay homage to the sport. However, American enthusiasm for lawn bowling quickly died out during the Revolutionary era due to anti-British sentiments, when many Americans decided that the game was a “Royalist activity.” For nearly a century after the Revolution, virtually nobody in America lawn-bowled—that is, until a wave of Scottish immigrants and lawn-bowling enthusiasts came to the United States.

In the late 1800s, a New Jersey lawn-bowling club formed and, for the next fifty years, the sport became wildly popular in the United States—especially among the wealthy. Since then, the game has become less common, but many Americans still play. The club at Lake Shore Drive has existed for more than eighty years and, though it doesn’t attract the crowds it once did, it continues to have a large following, with around thirty players showing up on a typical Saturday or Sunday.

In the United States, people often peg lawn bowling as a sport for old people, and pejoratively call it “old man’s marbles,” but Lakeside Lawn Bowling Club President Tom Michael reports that—at Lakeside—the game attracts people of all ages, shapes and sizes, including a few “yuppies.” One of the nice things about lawn bowling, Michael suggests, is that everyone can play—including “the young, the old, and even the mildly handicapped”—but he argues that the game still requires a great deal of skill “to play well” and notes that many lawn bowlers, like himself, spend years perfecting their sport.

Although lawn bowling can be tough, Michael encourages people to come to Lakeside to try the sport. He says that Lakeside is a special place both because it is right on the lake, and because of the “camaraderie” of the members. With parliamentary meetings, complimentary food, tournaments and a newsletter, the Lakeside Lawn Bowling Club tries to create friendly competition within a special kind of community. Many of the Lakeside bowlers have known one another for years, and friendly jokes about members are often incorporated into club publications and festivities. Though the club does charge minimally to maintain the grounds ($3 per game after the free first try, $50 per season), the club is not a for-profit institution, nor is it not run like one. United by their love of lawn bowling, club members loan their equipment to new players, and often donate their own money and food to the club. The Lakeside Lawn Bowling Club includes members from throughout the city and is constantly recruiting. As Michael promises, “there are people around who would be happy to teach you the game they love.”

And so, here am I, on the green. At the beginning of my game, I have trouble with consistency. I follow up a very good bowl with a truly atrocious shot that makes it into the gutter. Clark laughs and quips, “You’ve gone from the sublime to the ridiculous.”  But, by the end, I’ve learned to be more graceful.  My last shot is beautiful.  “Best shot of the game,” Clark smiles. “We’re slaughtering the opposition.”

Lakeside Lawn Bowling Club, 5800 South Lake Shore Drive, on Tuesdays at 7pm, and on Saturdays and Sundays at 1pm. The season runs from about May 20 through the middle of October.