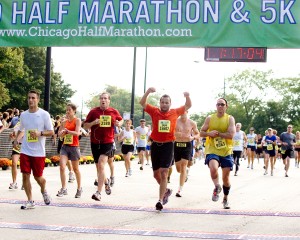 What does it mean when it’s easier to run 13.1 miles than it is to get to the starting line? When the race is the Chicago Half Marathon, with 20,000 runners arriving in Jackson Park, not far from the proposed epicenter of the 2016 Olympics, and the CTA seems to be running less buses on the one route that will take folks to the parking-challenged area, it doesn’t bode well for the city’s global aspirations. Oh well, maybe they handled the U2 concert that night better, since the bus rerouting for that event was reasonably well communicated. Never mind that Soldier Field is easily accessible via multiple modes of public transit and offers ample parking. Thankfully the race started late, as cars emptied their passengers a mile away, and hundreds of runners converged on the starting line after the appointed time. Many even had time to pee in the parking lot of the nearby Chicago Park District building, till the park workers starting shooing runners away. Too bad the portable toilets were completely inaccessible from the west side of the starting mass.

It was that kind of day, where the scale always threatened to overwhelm the event, but in the end never did. A beautiful day for a run, especially compared to the prior year’s near-monsoon, and the race’s organizers, US Road Sports and Entertainment Group—t’s now a sister run to the new spring half 13.1 Marathon Chicago—did a mostly decent job of managing the burgeoning crowd in Chicago’s by-far largest half-marathon field. Sure, they didn’t quite execute the smallest details with the careful precision of Rock ‘N’ Roll Chicago Half Marathon, nor was the trail nearly as beautiful as their 13.1 due to the requirements that such a large mass run on streets not paths. But for those runners tuning up for next month’s Big Kahuna, or even those looking for a vigorous challenge along the Lake, it did just fine. (Brian Hieggelke)