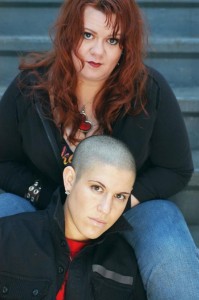 The time-honored tradition of The Fourth Annual “No Pants Party” makes Lincoln Park’s Skybar transform into a girls-for-girls paradise. From the sidewalk looking up to the second-floor window, two very scantily clad young ladies—with no more than pink lingerie and white fluffy boots—shake what their mammas gave them and hope their fathers aren’t aware of it.

A skinny, mustachioed hipster in maroon boxer shorts and suspenders dances to the muffled beats from inside the bar next to the uncomfortable valet attendants. Sunday at Skybar is designated Gay Night, and tonight is no different. Chicago’s strong and vibrant lesbian community is out in full force making the best of their last few hours of the weekend before returning to the Monday morning grind. The place looks like a normal party with loud house music and strobe lights until the adorable—and unfortunately unattainable—waitress, wearing American Apparel briefs, strolls over. She’s holding trays of fluorescent shooters, claiming they have the elixir for a time you’re sure to forget in the morning, only to remember as your head falls below the rim of the toilet upon crawling out of bed. Of course she didn’t actually say that, but we all know the result of glow-in-the-dark booze.

“I was sick of Boystown and Andersonville,” says Camilla, one of tonight’s organizers, about the venue choice. “We wanted to change it up.”

Tonight’s entertainment is hip-hop group Goddess and She, whose song “Lick It” was featured in the Showtime series, “The L Word.” As soon as the duo take the stage, the crowd of more than a hundred move to the tight rhymes and beats. Goddess and She aren’t only a massive hit in the Pride circuit, but graced the stage at South by Southwest and are awaiting the release of their latest effort, which was mixed in Chuck D’s house.

For a party that boasts a significant lack of pants, there sure are a lot of girls still dressed in baggy butch jeans. But that doesn’t matter. This isn’t the social gathering of the year, but exhibitionism doesn’t seem to be going away anytime soon by the looks of it. There is a fairly even ratio of pants to no-pants gals roaming the club sipping on drinks and gyrating to the mix. Of course there are body shots. Why wouldn’t there be body shots? Beautiful, same-sex-oriented girls slurping tequila from each others navels before making out with a lime wedge between their lips seems delightfully predictable. (Jonathan Kaplan)

The night was a hit! You can join the night’s group page on Facebook to know what’s going on every week-