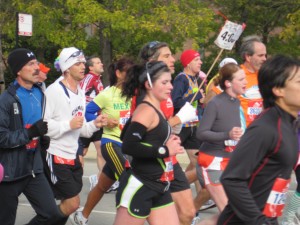 Walking toward the runner-reunion destination after the marathon, I noticed another finisher walking in the same direction. Her face seemed pained; she looked, well, a bit unwell, so I decided to gently inquire into her status. “Congratulations, how was everything, I asked?” “Great!” she responded. “I did a personal record!” My concerns about her wellbeing clearly unfounded, she went on to tell me that Chicago was her favorite marathon—she was from North Carolina—and that this was her fourth time running it. Favorite, even though she’d been here last two years ago, when the race was cut short due to extreme heat, a turn of events that had been a great disappointment for her.

Her belief, that Chicago is a great race despite its occasional flaws both major and minor, rings true: it is an outstanding race, combing a great course, outstanding fans and crackerjack management—its scale offering resources to focus on details unlike most any other—the bridges are carpeted!—but with a handful of shortcomings, many of them also manifestations of its size (just under 35,000 runners started the race and more than 33,000 finished).

Heat was a problem this year, but of another kind, as the overheated hyperbole of the television news stirred up images of near arctic cold plaguing runners, with reports from the pre-race expo focusing on bundling-up strategies that likely led some runners from warmer climates to overdress for the race. Actually, the weather turned out to be near-perfect for participants, if not for spectators, with start-time temperatures pushing off from the high thirties, with clear skies and mild winds. Perfect conditions indeed, as Samuel Wanjiru won the race with a Chicago and North American record time of 2:05:41 (about the time I was hitting the halfway mark).

The course itself is a terrific sampler of Chicago neighborhoods, reaching miles deep into each of the North, West and South Sides before reaching its conclusion in Grant Park. With crowds of spectators now reaching well over a million, there are few stretches of the entire 26.2 mile course that aren’t lined with supporters, entertainers and volunteers. While I’ve been one of those spectactors myself in years past, you cannot begin to perceive the power of the audience to motivate the runners until you’ve been out there in the race. Running may generally be a solitary sport, but the fans at the Chicago Marathon are like the proverbial “twelfth man” at a home football game, making a genuine impact on the outcome.

Since this was my first marathon, I can’t compare it to others, but I found the frequency and quality of the aid stations more than adequate. And to their credit, I recall that almost every one of them offered restrooms, a more-frequent-than-usual necessity when the body isn’t sweating off excess fluid. To my surprise, somewhat, the ample and quickly accessible toilets were still not enough for some runners, who splayed off the trail as soon as we hit Cannon Drive and turned Lincoln Park into the world’s largest public urinal. But most notable for me was the fellow who gave new meaning to the word manhole, stopping to relieve himself directly into one in Lakeview, right in the middle of the course, as runners dodged around him.

You certainly can’t hold the race responsible for humans acting like animals, but there were a handful of shortcomings that warrant improvement. Is it just me, or is Grant Park’s Butler Field always a mud pit anymore? It’s probably tactically unavoidable for an undertaking of this scale, but I wouldn’t situate any events in this spot until the city figures out a way to regrow grass here, since it created a fairly unpleasant gathering point for runners and their friends and families, not to mention as a setting for the 27th Mile after-party.

And I suspect something went rather wrong with the digital tracking system designed to allow folks to follow runners’ progress through email or text messaging, as the system seemed to be overloaded the night before the race. By the time we got into the web site, we were greeted with the message that it was closed. My father, out of town, did manage to register and track my results, which arrived as planned as I crossed the 10K and half-marathon points, but then not again, ever, even as I finished the race.

But these are minor issues in the context of the entirety of the event. The Chicago Marathon is a magnificent, epic undertaking, and an epic experience on a personal level.

Speaking of which, after starting out way too fast to sustain my pace—the combination of crowd excitement and a constant stream of runners passing me—I decided to put on my earphones, listen to music and just try to disappear into my own head and manage my pace. This worked out well, with a reasonably decent half-marathon time allowing me to just keep cruising along at my pace till I hit mile eighteen, when the legs started feeling the cumulative pounding of the pavement and my pace started slowing. I never “hit the wall”—perhaps buoyed by my strong familarity with the course and a steady ingestion of carbs and fluids before and during the race—but the last two miles were a fairly intense physical challenge anyway. But the pain disappeared when I turned off Michigan Avenue onto Roosevelt Road for the last 200 meters or so, almost choking up on the mix of joy, the sense of accomplishment, the outpouring from the crowd, but managing one last sprint to the finish.

1 Comment
Inline Feedbacks
View all comments
My Marathon? Running for, and from, life. An unlikely story | Newcity

[…] Newcity.com sometime after Sunday to find out if I made it. (I did; here’s my review.) See boutiqueville.com for my review of Chicago Marathon apparel, plus Newcityfilm.com for my […]