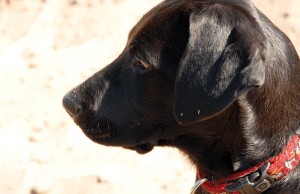 “A lot of churches don’t recognize animals as souls, ” says Linda, the proud owner of an adorable barrel-shaped mutt named Buddy that they found in an alley a few years back. Along with her husband Jim, the family ventures out on a brisk Saturday afternoon to The Irving Park United Methodist Church in Avondale to join their fellow dog lovers in a seasonal event called “Dog Bless America.”

Standing outside the church are a gaggle of furry barking friends and their owners waiting to walk up to the steps and receive a little holy good fortune. Virginia, a member of the community, says this is her first time getting her dog blessed, but has seen other churches participate every year around early October.

Replacing a communion wafer with a doggy biscuit, a member of the church wishes the dog and their family good health, happiness and a blessed thanksgiving. It really gives a new meaning to that movie “All Dogs Go to Heaven,” making the experience even more Disney-like with a person dressed in a theme-park-style dog suit, looking just as confused as its real dog pals. Snappy, Chloe, Sammy, Bingo and all the other canines seem quite content. Jim asks if “the dogs know what’s going on,” an inquiry they seem to ignore as they happily jump around the grass.

After the blessings are made, the group, organized by Central Bark owner Bonnie Lemperis, marches the eight blocks back to the Doggy Day Care Center where the animals go leash-free in the warehouse environment and socialize with each other, doing the usual sniffing, licking and aimless running around that make people envious of such care-free lifestyles. Refreshments are provided for both dogs and humans, though it seems like the pups, especially a rambunctious little Boston terrier, are more interested in the people food.

Bonnie purchased a Central Bark franchise, originally started in Milwaukee, about three years ago and since then has participated in the “Dog Bless America” program, which provides donations to America’s service dogs, making it possible to have protective gear and proper equipment to keep these dogs safe during their important jobs in the field. Along with the Prison Dog Program—which provides rehabilitation to prisoners by training dogs that will eventually be placed in the hands of a wounded veteran—Central Bark provides hundreds of people the happiness of man’s best friend. (Jonathan Kaplan)