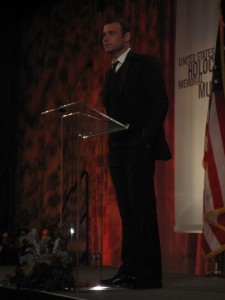 A gorgeous Indian summer morning and I’m frantically zipping around the Loop on my bicycle. A guy I know from Critical Mass, a member of the powerful Pritzer family, scored me a seat at the U.S. Holocaust Memorial Museum’s fourteenth annual Chicago luncheon, but I can’t remember which hotel is hosting the event.

It’s the largest fundraiser for the D.C. museum, which educates millions worldwide about the WWII tragedy and raises awareness of modern-day issues of intolerance and genocide, like the crisis in Darfur. While I certainly support the cause, I’ll admit that what I remember most from my museum visit a few years ago was thinking the Nazis had excellent graphic design.

Now late, I hammer south on Michigan from the Hyatt to the Hilton, then check email at a Kinko’s. Argh, the luncheon is north across the river at the Sheraton.

I arrive sweaty and winded to find a huge ballroom packed with more than 2,000 attendees, a sea of black suits and skirts. My table’s full of sharply dressed Critical Massers, mostly members of the “Tribe,” as we Jews like to call ourselves. The food’s terrific—a Japanese-inspired plate of teriyaki salmon, soba with edamame and sunomono salad—and it’s kosher. This stuff could give kosher Chinese a run for its money.

Mayor Daley takes the podium, his florid face projected on four big screens across the room. “The Holocaust reminds us to bring tolerance and understanding to our daily lives,” he says. Hizzoner adds that the Chicago Police Department, with its own legacy of brutality, is now educating new recruits about Nazi oppression, “to tell them what abuse can come from a gun and a badge and the power they have.”

Next museum director Sara Bloomfield heralds the opening of the first Holocaust memorial in Romania, the country with the second-largest number of victims, which until recently refused to acknowledge this dark history. “Romania’s dramatic transformation from a society in denial to a culture with a conscience is a tribute to what our museum has been able to accomplish,” she says. Bloomfield ends by paying tribute to Officer Stephen Johns, a security guard who was killed at the museum last June by a white supremacist.

The lunch closes with remarks by Chicago-born screenwriter Clay Frohman and actor Liev Schreiber from the film “Defiance,” which tells the story the Bielski brothers, who led Jewish resistance against the Nazis. Schreiber, who also appeared in all four “Scream” movies and “X-Men Origins: Wolverine,” says playing Zus Bielski was particularly meaningful for him since as a kid he yearned for strong Jewish role models. “These people went up against two fully armed German divisions complete with tanks and they beat them.”

Suzanne Nathan, a Masser who interns with the Council on Jewish Elderly, says she learned a lot today and had a great time. “I love the idea that there’s still work to be done and connections to be made in my generation.” And Liev Schreiber? “He is handsome. Hand-some.” (John Greenfield)