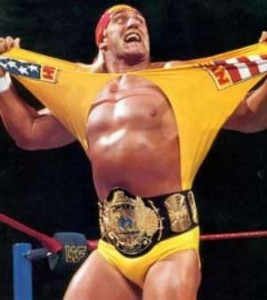 When Hulk Hogan is slated to appear at the Michigan Avenue Borders to sign his new hardcover, “My Life Outside The Ring,” fans line up outside as early as 6:30am to catch a glimpse of their god. Chris, the first in line, has not only already purchased fifteen copies of the memoir, but flew all the way down from Edmonton to stand in The Hulkster’s presence. “He’s The Hulk and nothing is going to break him,” he says of the wrestler’s recent reality-show-beamed travails. Will, a fan since 1983, is wearing a sleeveless shirt, displaying his Hulk tattoo surrounded by inked signatures of all his wrestling idols.

By Hulk’s side stands the Don King of wrestling, “The Mouth of the South” Jimmy Hart, clad in a sport coat, Chuck Taylors and dark shades to complement his jet-black mullet. When The Real American walks out, the only sound in the room is the thunderous chant of “Hulk, Hulk, Hulk,” with fists in the air as the wrestling rock star enters. A fan near the front of the line who comes dressed as his hero, calls at him to tear off his shirt in the fashion that made him famous. The Hulk can’t resist the photo op as his huge sun-drenched hands rip the cotton material from the fan’s chest. Yeah brother! (Jonathan Kaplan)