by Brian Hieggelke
November 5, 2009Filed under: 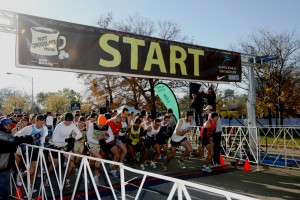 People get into running for many reasons—health, competition, even insanity I’m often told—but it’s hard to argue with the logic of running for the sake of indulgence. No wonder then that the Hot Chocolate 15K/5K has almost instantly become one of Chicago’s larger races, tripling in size to nearly 12,000 runners in this, its second year. Not surprisingly, the 15K field is quite a bit smaller than the 5K, but the distance is a perfect return to running for those who’ve done the Chicago Marathon three weeks earlier and need a stick or a carrot to get going again. But all runners in this race are unified in their pursuit of chocolate, which is delivered to racers through a rather tasty chocolate-fountain fondue (watching the staff madly unwrapping Hershey’s Kisses to feed the thing was something of an astonishing site) and through a conceptually terrific hot-chocolate booth. (And if we don’t talk about the assorted “trick-or-treat”-style candy-bar distributors near the finish line, those calories won’t count, so we won’t.)

If the goodie bag is a motivator, this one’s pretty upbeat, with either an attractive chocolate-colored running windbreaker or a comparable hoodie, along with a wicking runners hat. 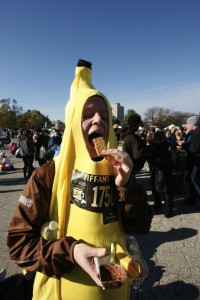 As for the race itself—easy to forget these things when chocolate and apparel are in the offing—the course is one of Chicago’s prettiest, taking advantage of the lakefront’s beauty and the intriguing coastline with magnificent city site lines in and around Montrose Harbor. Match that with a beautiful sunny fall day, devoid of wind (at least this year), and you have a great reminder of why, ultimately, we run: because it’s fun. (Brian Hieggelke)