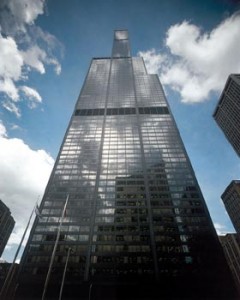 The awaiting crowd erupts with joyous congratulatory support as each racer reaches the top of Willis Tower. Drenched in sweat and smiles, the participants in this year’s Sky Rise Chicago couldn’t be happier to finish the 103-flight climb, if only to glimpse one of the best views in the world. Racers catch their breath and converse with fellow climbers, gazing out the windows of the Sky Deck, able to not only see their houses from up here, but miles beyond.

This is the first year the Rehabilitation Institute of Chicago organized this event, which raises money to continue awareness for their cause. Founded in 1954, RIC has been named the “#1 Rehabilitation hospital in America” by U.S News and World Report every year for the last eighteen years. Their standards of care and innovative research are commended, especially in the field of bionic medicine, robotics and neural regeneration. But you don’t have to be a Harvard graduate to understand the immensely positive affects the RIC has on its patients.

The more-than-1,800 participants include current and former RIC patients and employees, local firefighters, high-school track teams, elite climbers and Paralympics athletes, who have a hand-cycle event that allows them to peddle the distance and resistance of the massive 103-floor climb.

Mike Dineen and Claudia Mitchell are among those who stand among the perspirating mass with an extra air of accomplishment. Mike, a sergeant in the Chicago Police Department, underwent brain surgery after a fall, spending a month in a coma, unable to walk, eat, breathe or speak on his own. Before transferring to RIC, his doctors told him he’d never walk again. After a month of intense physical therapy, Mike can not only walk, but finished the climb in around thirty minutes. “RIC is the best,” he exclaims. (He anticipates returning to the force on December 1.) Claudia was the first woman to receive a state-of-the-art bionic arm designed by doctors at RIC after a motorcycle accident in 2004.

In the lobby of Willis Tower, hundreds of people chat and watch their friends and family conquer one of the tallest buildings in the world. “This is just amazing,” says an excited spectator as he watches the hand-cycle event, with the sound of cheers and clapping filling the air. (Jonathan Kaplan)