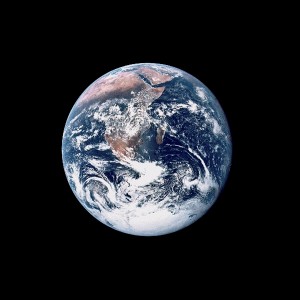 As part of the Adler After Dark promotion, appetizers and cocktails are served on this Thursday at the Adler Planetarium against the dark Chicago skyline, hardly discernable from the murky waters of Lake Michigan. It’s truly a serene sight, and also a stark contrast with the night’s theme: the end of the world. Dr. Mike Smutko, an astronomer at Adler, says, “Adler After Dark grew out of a way to try to reach the twenty- and the thirty-somethings, who haven’t been to the planetarium in a while and have forgotten how great it can be.”

“It’s very tongue-in-cheek,” says Smutko on tonight’s theme. “We were originally inspired by the CERN particle accelerator, which will be the world’s most powerful accelerator. They’re powering it up again this weekend.” He continues, “There have actually been lawsuits filed to prevent that from happening, because some people are worried that they might make these exotic particles that will destroy the whole world, and most people agree that would be a bad thing.” These tenuous concerns, however, hold no scientific backing. Dr. Don Lincoln, author of “The Quantum Frontier: The Large Hadron Collider,” is here to soothe peoples’ fear.

“The universe is constantly bombarding the Earth with cosmic rays. High-energy collisions have been going on for a long time,” he assures in his presentation. “You would have to run the LHC for 100,000 years to get that many collisions.” Despite tonight’s rather ominous theme, the general tone of all involved is lighthearted irreverence. Dr. Lincoln says, “The simple reality is you should go home, and not sweat it, and after the lecture, go upstairs and have a drink. It’s going to be okay.” (David Stockdale)