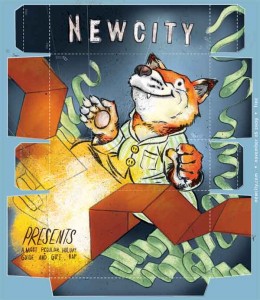 With the retail economy still in the tank for another Christmas, that little shop around the corner might just be barely hanging on, counting on an emergency shot-in-the-arm from this holiday to inject the medicine it needs to survive. That’s not the reason to shop there, though. Shop there instead because you’ll find a range of charming and creative gifts that are not for sale at your local Wal-Mart, because you’ll get knowing, thoughtful help from merchants—real merchants—who will offer living proof of that service that your grandfather complains doesn’t exist anymore. And when you’re done, you’ll have at least a fighting chance to experience the kind of Christmas you used to fantasize about as a kid, rather than the depressingly over-commercialized dreckfest it has so often been.

For Presents this year, we offer up our Twelve Shops of Christmas, each and every one local, many featuring the work of local artists and artisans. But don’t despair if you’re not nearby: the city—your neighborhood—is full of equally compelling shops that are more than worthy of your time and money. Spend thoughtfully  and you’ll help keep it that way. 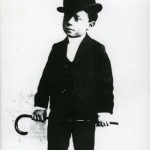 Pilsen’s Golden Age may seem strangely intimidating upon first entrance—the sparseness and white-wall ambiance offer more of a gallery feel rather than an accessible-art shop. But the straightforward approach to selling mostly limited-edition pieces of art and apparel—from zines to vinyl to clothing, and even cassettes!—makes for a comfortable, if alternative, shopping experience. Good finds at Golden Age currently: Filmmaker Harmony Korine’s “The Collected Zines” box set, with collaboration with Mark Gonzales and reissued by Drag City ($100); musician and artist Sam Prekop’s book of photography, simply titled “Photographs,” featuring mostly black-and-white images shot around Pilsen ($25); and pieces by New York designer crew Slow and Steady Wins the Race, which produces designer apparel and accessories with a knowing wink towards the customer, including a cloth reproduction of the classic quilted Chanel purse ($100). 1744 West 18th, (312)850-2574 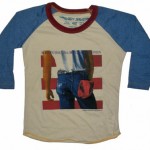 Somehow somewhere along the way having a kid became a hip thing to do, and Baby Gap isn’t the only shopping option: left-of-center children’s toys and clothing has kept up with stores like Psychobaby in Bucktown, a bazaar of kids’ items that’s as sugar-rush overwhelming as it is affordable. The “Rockabye Baby!” CD series—lullaby instrumental covers of music by beloved acts like The Ramones, Radiohead, The Beatles and even Metallica—can be found in stock ($16.98), as well as a wall of children’s games that includes the charming Pop the Pig ($31), in which each player force-feeds a pink pig hamburgers until his stomach bursts (sort of a Hungry Hungry Hippo for the Guantanamo Bay generation). But clearly it’s of the utmost importance that your kid looks cool and stands out, so thank rock-god heaven for Rowdy Sprout’s Rocker T-Shirts, itty-bitty-sized shirts for boys and girls boasting artists like Hendrix, The Beatles and, our favorite, Bruce Springsteen ($39). 1630 North Damen, (773)772-2815 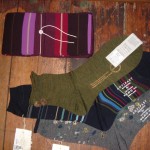 Robin Richman’s boutique continues to thrive as a Bucktown shop that offers designer clothing with a moody aesthetic, like the most sophisticated (and expensive) goth-wear you’ll ever find. Even better are the inventive housewares, which include assorted Mercury Glass Votives ($14), silver candle-holder cups that wouldn’t look out of place on the “Beetlejuice” set. (Just don’t drink out of them.) San Francisco artist Agelio Batle’ graphite pencils—meticulously crafted into various shapes like leaves, owls and peapods—would be a creative gift for just about anyone who writes down anything ever. Even better, nothing rubs off on your hands. Or, an easy, sure-bet option for women would be any combination of the Antipast socks on display ($30). The Japanese company, founded by textile artists Emiko and Junko, also makes scarves and tights. 2108 North Damen, (773)278-6150 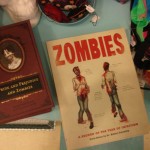 Wicker Park’s Rudy’s Roundup describes itself as a “Modern Day General Store,” and there may not be a better place to score not-so-serious gifts for your friends. Highlights include humorous, often-dirty-birdy magnets—a glistening, muscular Christ with the slogan “Look up in the sky! It’s Gay Jesus!”; a businessman frankly stating “I’m here about the blowjob”; a housewife informing us that “You say tomato, I say fuck you”; and a cute panda with the understated, eloquent “Pandas! Fuck ’em!”—that would be conversation-starters on any fridge ($4). Zombie books make for fine giving as well, especially Dr. Robert Twombly’s “ZOMBIES: A Record of the Year of Infection,” as well as Jane Austen and Seth Graham-Smith’s collaboration, “Pride and Prejudice and Zombies.” Rudy’s also offers Chronicle Books’ lovely journal diary, offering a most precise title on its cover: “Fuck You and Your Blog” ($9.95). 1410 North Milwaukee, (773)486-6400

A night of dinner and drinks at the stylish new place-to-be always goes over well, but goes over best when the joint’s from the owners behind places like Danny’s Tavern and Blackbird. There was a collective sigh when it was announced that the Pontiac Café was closing, but the opening of the highly conceptual Big Star—which is a nice alternative to the ridiculous wait at The Violet Hour just across the street—sent waves across the land for its honky-tonk-chic allure and cash-only on-the-cheap fare. Trendy taqueria stops can send eyes rolling, but Big Star’s western vibe and long list of specialty whiskeys won us over quite quickly. Most food options come in at under ten bucks, and any restaurant that name-checks Alex Chilton is OK in our book. 1531 North Damen, (773)235-4039 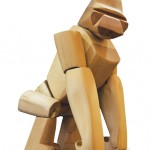 Museum stores are always dependable places to find gifts both specific and intellectually stimulating, and the MCA Store’s abundance of books, art objects, jewelry and more make for a must-stop on any gift hunt. Art objects include Hanno the Gorilla, designer David Weeks’ hardwood creation that can be sculpted to take on many separate poses ($95). Icelandic artist Olafur Eliasson’s color illustration book from his recent blockbuster Chicago show, edited by MCA director Madeleine Grynsztejn, titled “Take your time” and featuring more than 200 of his works, is bright, bold, beautiful and only $50. Jewelry includes earrings, necklaces, pins and bracelets, plus designer Laurinda Spear’s uber-slick Chroma watch, a unisex colorful timepiece made of brushed stainless steel ($125). 220 East Chicago, (312)280-2660 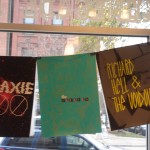 Renegade Handmade stocks a supply of the super-graphic, eye-catching promotional band posters plastered all over music-venue-heavy areas like Wicker Park and Bucktown. If someone who makes your knees wobbly (but still doesn’t know your job description) is head-over-heels in love with Minus The Bear or Galaxie 500, they will adore the artistic feel of a promotional show poster (as opposed to yet another photo of the band attempting to look somber yet carefree). Likewise, the dual function of art and an expression of personality is sure to go over well with a pal whose bedroom is looking a little threadbare, or a kid who’s shipping off to college. Efficiency is key in those dorm rooms (and who are we kidding, most twenty-something apartments). Posters range from $20-$35. 1924 West Division, (773)227-2707 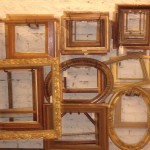 Even better, take that newly purchased Feelies poster and have put it between some wood at Foursided, Lakeview’s premier custom-framing store. Self-proclaimed “frame nerd” Todd Mack and his staff emphasize a personal passion for their work and devote themselves to assisting the customer in finding the perfect frame—we’ve never come away disappointed. Frame a newfound piece of art for a friend or family member, or a beloved photograph to help preserve a memory forever. The store also offers posters as well, including the famous (and admittedly pretty cool) city neighborhood posters. 2939 North Broadway, (773)248-1960 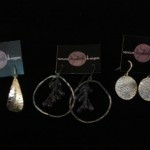 Will men ever stop buying jewelry for women? Not likely, so it might as well be something really special, then. Susan Elizabeth is a Chicago-based designer who knows her way around a wire. Spinning out all kinds of jewelry from cuffs and rings to earrings and necklaces, Elizabeth’s designs feature intricate and unique shapes that at once eschew the plain and ordinary, and yet are also breathtakingly wearable. Prices dip as low as $20 for a piece at the Silver Room, but can also venture as high as $600. Thankfully, Silver Room also offers a wall of trendy shades, each pair only $15. 1442 North Milwaukee, (773)278-7130 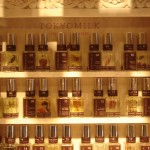 Perfume is one of those hit-or-miss gifts that sounds like a great idea until you are standing in a department store a couple days before Christmas, trying to simultaneously dodge salespeople and figure out how your sig-o would like to smell. Simplify the process and maintain that mystique of presenting them something in a glass bottle with Tokyo Milk’s Objects of Desire scents. The bottles are relatively small (so if they hate it, it’s over in a jiffy), inexpensive ($30 a pop) and contain novel-sounding names that belie largely appealing scents; i.e. “Gin & Rosewater” sounds like a blackout waiting to happen, but the scent itself is subtle and clean. Likewise “Eden” and “Song in D Minor” are not overpowering or headache-inducing—they just smell good. These, and many more, can be found at Division Street’s Elevenzees. 1903 West Division, (773)772-1150 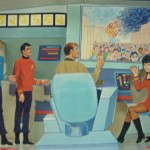 Since it’s common knowledge that people who wouldn’t enjoy a new book or a hard-to-find edition of a classic are not to be trusted—therefore you’re not buying gifts for them—Broadway’s Booklegger’s Used Books is full of fantastic finds for any member of the family, any friend, any partner. The high-end lover of classics? How about gorgeously bound vintage editions of Tolstoy’s “War & Peace,” “The Complete Works of Charles Dickens or Thomas Hardy’s “The Mayor of Casterbridge.” For a younger recipient, how about something from the old-school Nancy Drew set in the children’s section. For your crime-novel-devouring dad, first-edition hardcover copies of James Lee Burke’s Dave Robicheaux novels. Or, for either an adolescent enamored with the Enterprise, a hardcore adult Trekkie or a irony-loving hipster collector, how about the 1977-published “Star Trek” pop-up book adventure, in fine condition and only twenty bucks. Most finds were well under $50 as a whole, though the signed Algren is, ahem, up there. 2907 North Broadway, (773)404-8780 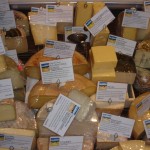 Never underestimate the power of cheese. Greg O’Neill and Ken Miller’s Lakeview spot Pastoral offers the best in fine cheeses, spreads and wines, wonderful collections for hosting, or, of course, gift-giving. The store even compiles specialty “gift collections,” essentially doing the job for you. Our favorite? The “Best of the Midwest” concoction, of course, which features cheeses (like Aderkase Reserve and Wabash Cannonball) from Wisconsin and Indiana farms, plus French Salted Caramels from Chicago and organic crackers from up in Madison, all for $59.99. Toss in a bottle of red or white for only $20 more. Pastoral also offers insightful cookbooks and cheese manifestos like “The New American Cheese.” 2945 North Broadway, (773)472-4781

Presents was written by Tom Lynch and Emily Torem.