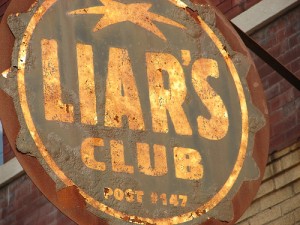 Liars Club, Saturday night, frigid waves of gusty wind keep smokers indoors and the room itself relatively empty. A smattering of dancers shuffle to “Single Ladies” on the floor; something old, 1970s-tinted, is on the television mounted near the ceiling. The bar, dark as a cave as always, becomes paralyzed by new chills each time someone walks through the door, the unreal air having the advantage of surprise. DJ walks a tightrope between Jay-Z, Stones, Rick-fucking-Springfield. He wants to tell her that he loves her but the point is probably moot.

This is a weekend of moot points, as the NFL’s regular season comes to a close and only twelve teams advance to the postseason, the Chicago Bears not one of them. Last April, the Bears traded for Jay Cutler in what was easily one of the biggest and most ambitious deals the franchise ever made. Hopes soared to alarming levels: Would the team make the playoffs for the first time since its Super Bowl run in 2006? The Bears finished 7-9, the team’s worst record since 2004. For fans, disbelief turned to disappointment, which quickly deformed into distaste and resentment. This JC was no messiah, after all.

A familiar guitar note, a D chord. Tom Petty? “Well she was an American Girl…” Enthusiasts flood the floor and move and shake. The night united. An American song, an American bar, as American as cold beer and football. Even the losers get lucky some time. (Tom Lynch)