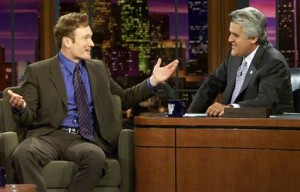 On a Monday afternoon, diehard fans of a late-night legend huddle in the cold outside NBC headquarters in Pioneer Court. More than a hundred people stand in the picket line, waving colorful signs displaying admiration for the redheaded funny man who has been making people laugh for his entire adult life.

A mother and her two young daughters stand clad in orange attire, the theme for this evening’s march along Michigan Avenue. “My daughter is the biggest Conan fan,” says the proud mom. Fans in Conan wigs and orange wool caps pace in front of the tower as security guards keep them just beyond the NBC property. “This is actually a Trump wig,” says Qais of his hair garb. “This feud is worse then Leno vs. Letterman.”

The movement, titled “I’m with Coco” and sparked from Facebook with the phrase “We’re with him, no matter what” as their mantra, also has rallies today in New York City, Los Angeles and Seattle.

Despite Leno pulling a Brett Favre-like retirement at NBC’s behest, Conan fans, for the most part, don’t have too many nasty things to say about the amply chinned host. They just want O’Brien to stay on the air.

“I don’t care what channel he’s on or what city it is filmed in, I just want to watch Conan,” one man exclaims, sporting an orange beard and a perfectly coiffed hairdo. Another fist-raising fan exclaims, “You’ll always have a home here, Conan!” (Jonathan Kaplan)