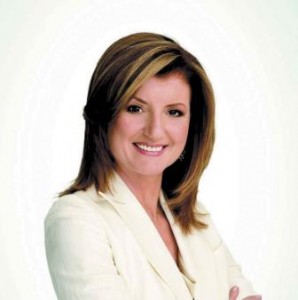 Nearly two hours before the night’s speaker is scheduled to go on and yet people are already buzzing around shaking off the weather inside the Conaway Center at Chicago’s Columbia College. A woman directs people to the registration line. A man jokes to his friend about her hair, but she chalks it up to the wind. A trio of adults weigh their chances of getting into tonight’s event. It feels not unlike lining up for dodgeball. No one wants to get picked last.

Two student ushers direct people to the overflow room and tell the lucky ones—those who registered early enough for tonight’s event—that the Film Row Cinema will open shortly. A few men try to flirt their way out of the room and into the theater. “I’ve got overflow tickets,” a man in a ball cap says, smirking. “How likely is it we’ll get in?”

A woman appears in a headset, “You know it’s really hit or miss. I don’t want to promise anything.”

Columbia has set up two overflow rooms for their second lecture in the free “Conversation in the Arts” series. Tonight’s speaker is Arianna Huffington, and the upstairs overflow room is packed. There are two projection screens set up, and everybody sits on folding chairs. There are filler conversations about the Kindle and the Australian Open. A lady warns of car dealership tricks. “You’re always taking your chances with that after-market stuff.”

At 7pm the room’s informed there is seating available for those carrying tickets one through twenty-three. There is a muted “aww.”

Huffington litters the first part of her lecture with silly puns and cheap jokes—“The information superhighway might have some roadkill…”—but once she gets going on the current political climate, it feels less scripted and more engaging. She interrupts herself several times to cover as much information as she can. In an endearing move, she pauses to say hello to an old friend.

Throughout the speech, there is a distinct phone vibration. And while Huffington takes questions from the audience, it becomes apparent it’s her’s. The lady who, a minute earlier, was calling for us to take time to “unplug and recharge,” fields text messages and audience questions simultaneously.

As Huffington leaves the stage, everyone in the overflow room applauds the projection screen. “It’s the message,” a young woman says. “Not the setting. And it’s immediately transferrable.” (Peter Cavanaugh)