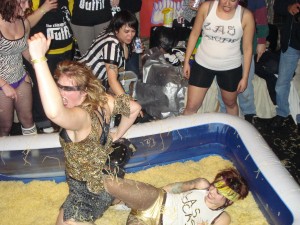 This is Exit, right? One of the bar-backs wears a Ben Sherman polo, and women wrestle on the TVs behind the bar. But there are also gin and tonics. Flannel. Middle-aged men in Bears pullovers flirting with the roller-derby girls selling raffle tickets near the door. The girls, sporting heavy makeup and Chicago Outfit t-shirts, point everyone up the stairs. Tonight, the Outfit host their second annual spaghetti-wrestling fundraiser, with part of the proceeds going to Action Against Hunger.

Upstairs, the feeling is a little bit more punk—at least it definitely smells more punk. Bodies are crammed together, anxiously looking around waiting for the action to start. In the middle of the crowd is an inflatable kiddy pool filled with a gross amount of shimmering spaghetti. The crowd is equal parts guys and women, but a few guys—in an oddly perverted way—are much more vocal in their urging on of the wrestlers. Around 11pm, someone interrupts the Dead Kennedys to say there are some technical difficulties, but that the wrestling will soon start. Rory, one of the louder and bigger attendees, is crammed against the side wall. He shouts, “I will be your technical difficulty if you don’t start the show!”

When the action starts, amidst a chant of “OUT-FIT! OUT-FIT!” and the last-minute calls to buy raffle tickets, it is a little unorganized, and unless you’ve stationed yourself in the first few rows, it’s a stretch to see any of the flying spaghetti. A woman edges closer to the action past a group of guys. “If I hit your balls, I hope you enjoy it.” People are plastered up behind the fencing at the back, their fingers curling over the metal and eyes wide. One of the wrestlers grabs a handful of spaghetti and shoves it down her opponent’s spandex bottoms.

In between matches, the emcee calls out winning raffle tickets. After a few numbers go unnoticed, a lady in the crowd jokes that she’s won. She has not. Two Outfit girls pull her—red heels, pearls and all—right into the spaghetti, stuffing noodles wherever they can.

Outfit rookie Christy Yama is roughly six feet tall and aptly named The Amazon. In a marathon match, she handles the tag-team combo of Las Locas. After pinning one of the Locas, Yama raises her fist, which is immediately filled with a Pabst can. “My main goal,” offers Yama, “was to relax and make them think they won. Then I explode. It worked every time, though I think I might have a broken nose.”

The crowd is slow to leave as the event winds down. An Outfit girl is lightly littered with spaghetti as she carries a bucket filled with singles and interrupts her call for donations to say, “I never thought I’d walk around the Exit without shoes.” (Peter Cavanaugh)