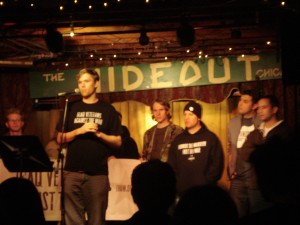 The crowd inside the Hideout is gently packed by 8pm. Pockets of conversation get swallowed up in hugs and the toasts of pint glasses. Twenty minutes later, a young man named Aaron Hughes takes the stage. He’s tall, but his soft voice and earnest expression seem to shrink him. It’s disarming, then, when he ends his monologue with a confrontational question: “What the hell do you know about Afghanistan?”

The backroom of the Hideout is now full and leaking into the bar area. Someone from the crowd shouts out, “Taliban!” Another yells, “poppy fields!” After a few more keywords, there is a decided stillness among the audience, proving what organizers of the night’s event hoped. The general public really doesn’t know much about Afghanistan.

The Iraq Veterans Against the War has assembled here with a night’s worth of skits, songs and stories in hopes to make this issue a little less foggy. Mark Messing, from local band Mucca Pazza, acts as emcee. He calls forward writers, performers, a professor, veterans and those still facing deployment, such as Alex Villatoro. A nine-year veteran, Villatoro relays the struggle of opposing the war yet wanting to stay by his troops. He talks about the need for aid for the people of Afghanistan and how he and his troops are not trained for that. “All we know is to kill,” he says. “Search and kill.”

The night seems to ping-pong with emotion. Jessica Hudson and Chloe Johnston do a comical interpretation of the Counterinsurgency Field Manual, complete with “arty glasses” and “douchey music.” The crowd laughs and willingly donates money when called to.

A lot of the veterans who come on stage use the words “my brothers” or “my sisters,” and during intermission you see how close most of them really are. Even the ones who don’t actually know each other are hugging and patting shoulders giving their thanks.

Peter Sullivan rallies the crowd back together after the break, and leads them in a call-and-response march. People here are quick to follow his steps—marching in place—and repeat as he yells, “Momma can’t you see what this war’s done to me?”

Afterwards, Christy Harrison stands next to the wooden fence outside and waits for a cab. “I felt really stupid about this,” she says. “I don’t know where anything is, and I felt like the people that needed to know knew and it was OK that I didn’t.” This is a sentiment most seem to have about the current situation in Afghanistan, and which the IVAW are trying to relieve. “I’ve dated a lot of military guys,” she says. She stresses that most of them, however, were gung-ho about war, and tonight’s event put what she felt was a much more contemporary spin on things. “I also got some selected readings [on Afghanistan] from the professor,” she says with all smiles. (Peter Cavanaugh)