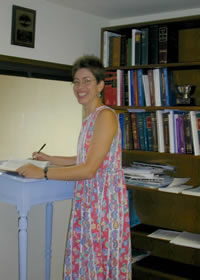 Sheila Simon: Will she "ex sell?"

Now that Governor Pat Quinn has chosen Sheila Simon to be his running mate, we may not be hearing much more about his erstwhile sharer of the slate, Scott Lee Cohen. But it’s been hard for me to forget Cohen, who (in case you’ve already forgotten) dropped out of the race after his ex-girlfriend said he was unfit to hold office. She had accused him of threatening her with a knife. His ex-wife had accused him of violence, adultery and attempts to force sex.

My own love life has been less dramatic, luckily and happily. Still I’ve been wondering whether my exes would think I was fit to be lieutenant guv.

I’ve managed to acquire a number of exes; I was 39 when I met my first and only husband.

There was Michael, not his real name, whose love letters and Dear Jane letters I was going through the other night, because he’d just popped up in a dream. Based on these letters, I imagine that he would tell the voters that I was living in a fantasy world. That’s what he told me: he was ten years younger and said that it was crazy for me to think that we could live together. I don’t even know if I should call him an ex, our relationship was so short-lived. I used to think that literary agents had the shortest attention spans known to humans. Now I know that they come in second, after 19-year-old males.

Then there was “Leo,” who would recall that I wouldn’t commit, and might therefore tell voters that I couldn’t be trusted to stay in office all four years. There was Noah, who always liked my politics, but he would probably say that I cried too much and was messy. Noah, by the way, was secretive about his last name, because he didn’t like the sound of it. I think I might be one of the few people who knows what it is; he’s not likely to run for public office.

I’m on pretty good terms with Bob, one of many men who went out with me just before meeting their future wives. I used to think about advertising myself: Go out with me and you’re guaranteed to be married, soon. Bob emailed me: “A good lite guv is sort of like a loyal dog, someone who sits faithfully by the table when you dine and waits for scraps to fall.” Yes, he said LITE guv, and he knows his way around state politics. “That is not you. You are too opinionated and barky to be a good lite guv, which is what I always liked about you. (If you can’t tell, you caught me at dog-obedience school when you sent this note. My mutt almost has me trained.)”

Maybe his dog would be a good nominee. Think about it: she’s loyal, trainable, affable and sincere, greets people effusively, would enjoy jaunts to Springfield, especially by car, so she could stick her head out the window. And she’s got no paper trail: no divorce, no tax history and no tattletale boyfriends.

I asked a couple of friends about their exes. Sharon and her first husband Steve were divorced more than a quarter-century ago. She said she would endorse him for lieutenant governor, especially now, because he needs a job.

My friend Garry has been divorced more than fifteen years. I don’t think it was amicable. You can judge for yourself. He emailed me: “My ex would make the best lieutenant governor since Lady Macbeth. Lieutenant governor would be an ideal job for my ex-wife. She loves spending her life going to funerals and this way she could get paid for it.”

I figured I ought to ask my husband, since he knows me the best. Was I qualified to be second-in-command? He answered: You’re as qualified as Pat Quinn.

Which is diplomatic, or damning—depending on how you read it.